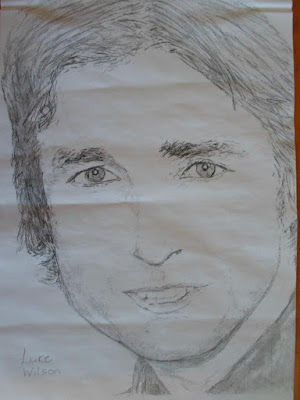 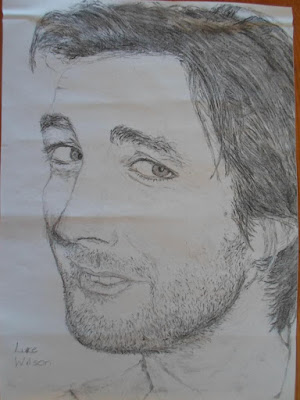 * There's a blooming good reason of why I've actually drawn more than two pictures of this Actor and younger may I add, of brother "Owen Wilson" "Luke Wilson" and that is, every time I watch any of his films and I really do mean, ANY is that all I've got to do is just simply look into those big ADORABLE BROWN EYES and see that gorgeous smile of his that suddenly makes this girl go into a little a world of her very own.
* And oh boy! Do "Luke Wilson" sends this girl into a little world of her own whenever she just simply watches any of his FILMS with that smile!

* And that's a gods honest truth guys!  That guy, "LUKE WILSON" or could that well be someone else, who I don't want to admit it to herself, that had always sends this GIRL into a little world of her OWN as in going all shy-like when I had always used to SEE THEM AROUND!!!

* And that's no joke either!  They really did but still I will adored my "Luke Wilson"...  Because why, do I think this! Well first of all when I first saw this person around well every single time they had looked at me so nicely and I do mean so nice then, looking or acting like they were so NASTY or angrily-like, like, they were in a bad temper as they sometimes were to me, gave me a a huge smile!  Which I've got to say had thought at the time that's why I may have ended up liking them so!

* Course if you must know before meeting this person who I probably do LOVE but who's hiding the way she truly feels for them through LOVING the way she does for "Luke Wilson! Because if it won't for them well then, I wouldn't have really known or discovered my gorgeous (Brown Eyed) "Luke Wilson!!!

* Because of how every single time I looked into those deep dark brown eyes of theirs and see that dam SMILE of "Luke Wilson" well they seems to do exactly the same thing whenever I watches any of their films now to what that person had always seemed to have done to me! * Which is, go completely red in her face and really SHY!!!
Only, maybe a little more... Which no one as ever done before!  And that's NO joke either guys!!!

* Which is so nice for me to feel-like, course I've never had that opportunity in my enter life time to ever feel like the way I was starting to feel for, for either that someone then, to discover that Actor, "Luke Wilson" who had truly reminded me of them in every way!  Awww!!!

* So, I would like to say a huge big thanks to that SOMEONE for coming into my so-call CRAZY life for those many years ago, when I meet them and allowing Me to stumble upon their LOOK-ALIKE "Luke Wilson!  Course, oh boy!  Luke really do knock me down as well!!! So, thanks again my Sweeheart!  Shame though, you didn't want to know me like a very good friend which at the start had so wanted to be!  As, you were the only one that had put a huge SMILE on this girl's face whenever I saw YOU!!!

* But oh boy! When I first stumbled upon the very first DVDs of "Luke Wilson" called "IDIOCRACY" well let's just say I had fallen for Luke straight away, like IMMEDIATELY in fact, because of how he had reminded me of that person so much but maybe better!

* Because when I really look at that Actor "Luke Wilson" well it's just something about him that makes yours truly smile even more so then that person had probably ever did! And why! Well it's because "Luke Wilson" really does SMILE a hell of a lot and that look about him well sends this GIRL more SHY then she had ever did!

* So guys!  What I'm trying to say is that yours truly really does feel like that she as fallen in LOVE but so in LOVE with two guys, then the ONE which I only thought before knowing about Luke Wilson...  But that doesn't mean I'm hoping that, that person does see this, course I sure hope they don't!  And why, may I ask you!  Well it's because I don't think I want them to ever know of how I will always LOVE them because of what they've done to me,which is giving me that gift for falling hopefulness in love with Luke!   Because "Luke Wilson" makes me feel I can't get hurt if I do love them or show that I really do them love them...   If you catch my drift guys!

* Because I've never actually been in LOVE before, then with that certain person, never!!! Which if it weren't for them wouldn't really know that I may fall in love with you know who Luke Wilson!!! So, guys, out there, what I'm trying to say is that I'm probably liking to believe that yours truly will always now be so in LOVE with not just TWO guys... But maybe that certain ONE that made her stumble upon Luke's DVDs in the first place that long time ago!

So, guys! If you want to know something else, as well! Well if it weren't for them again, well who knows, I probably be still be in love with "Robson Green" as I use to adore so very much way before that person had came wondering into my life. And who is another Actor and who was my Hero then, for a very, very long time! So, what I'm trying to say is, is that no sooner then they had turned-up in my life well guys, if it weren't for them, they wouldn't have stolen my HEART away from loving "Robson Green" as I did!

But I'm not saying I will stop loving that Actor "Luke Wilson" no! Course I won't ever stop loving him!!! NO!

* Only guys, even though what I just said I think I really preferred dreaming that I'm so in LOVE with my big (Brown Eyes) "Luke Wilson" then anyone else! Course, as I don't want to ever get my feelings hurt by anyone, anymore!

Sorry! But there you have it... This so-call girl may have to imagine she will always be love her Luke Wilson!
Posted by jsm at 00:51