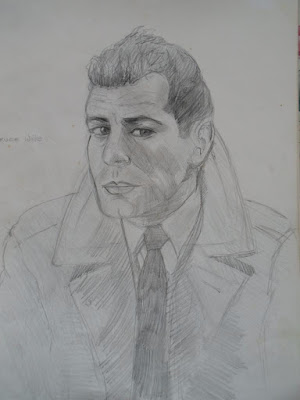 
Now, call me mad, but around this period of time I loved watching Moonlghting which was an America Series back in the mid-80's that starred Bruce Willis in his younger years. But, I didn't fancy him like I was Mad on him. Only, that whenever I saw him starring along side Cybill Sherbard as Maddie Hayes and he played David Addison,, someting just told myself that I liked him as well as to draw him.
Posted by jsm at 06:43