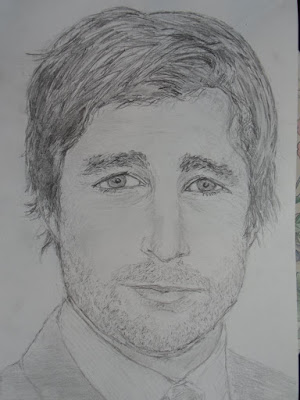 There's really a blooming good reason of why I've drawn more than TWO pictures of this particular Actor as well as the younger brother to Owen Wilson!!!  And that is, and wait for this guys, is that "Luke Wilson" is his name, well, every single time I watch any of his films "and I do mean, any of his Films is that -  it's like all I've got to do is just look into those deep dark BROWN EYES of his and see that gorgeous smile also, that that's it!  The guy always seems to make this girl go into a little world of her own...  As in guys, going completely shy-like, as I once was, but seems to REAPPEAR then really hiding it!

But, am I complaining, "Not bloody lightly, I'm not" course, if you must know I'm loving every blooming minute of it!  Why! Even thinking of him at times sends this GIRL going into DREAM-LAND!!!

So, really guys, there you have it, this Actor "Luke Wilson" is the only ONE now, that can really get this GIRL all DREAMY-like, like I'm not with you guys, but in Cloud 9 or in a world of her own yet again!

* So, thanks for being the only PERSON that can do this to ME "Luke Wilson" if you do happen to go onto my Web-site and see this!
Which I sure hope YOU do!

Course, it's so nice to feel that every time I look at YOU and see that lovely smile of yours in all the Films you're in well YOU and you alone, is the only ONE that could make this GIRL go all SHY and bashful!

* But, if the truth is to be known, if it really wasn't for a certain person that was in my past-life then really I wouldn't have probably start to feel the way as I do now, for "Luke Wilson!!!    Which, is (falling head over in heals) in LOVE then...   But falling in love with that real person which I nearly came so blooming close to loving them, back then.  I still got to say "Luke Wilson" has took their place, One hundred per-cent!!! Even though, at certain times, I may still think to myself I'm in LOVE with the real ONE!

Because guys, even though this may sound stupid to you I was bought up thinking that if I had ever came to falling in LOVE with someone so special, then those love feelings for them will last until I die.  But just going for any Actors, as I truly had in my past, couldn't make ME go back as a very, very, very shy girl as I was those many years ago.  Course, if you must know, that so-call real person who I did actually found some what adorable had always made this girl go all SHY whenever I saw them!!!  Which, always scared me!

* But, that doesn't mean to say the way I truly feel for this Actor "Luke Wilson" and only this Actor that I've drawn four times is the same as I had felt for all those other Actors from my past! Because it isn't!!!  Because, after meeting that guy, that had kept blooming knocking out ever time I saw them, course of his big brown Eyes and that lovely smile of his well, I've now put all those emotions onto the Actor, "Luke Wilson" course, he really does make me think I'm still looking at the one I will always remember so fondly!

* So, what I'm truly feeling for that Actor "Luke Wilson" is first of all not probably real because if you must know what I'm really doing is - ONLY trying to hide my true feelings for how I really MAYBE, feeling for that someone in the past again!

* And maybe preferred that then, carrying on how I truly feel for the one and only may I still add, that in a way had hurt my feelings...

* Even though it may not be really intentionally I don't think, which I sure hope it wasn't - had hurt me alright!!! But what I can say is it was really him that made me go all SHY and BASHFUL in myself whenever I had used to see them around that is... NOT "Luke Wilson! But only them!

* So, thank you to that certain person for this feeling that I've never had and for unexpectedly allowing me to stumble upon and discover by accident, my lovely (Brown Eyes), which I just like to think of "Luke Wilson" of only...   Because, if it hadn't really been for that person, well I've never would have heard of "Luke Wilson!

* Course, really being the way I am but only, and only may I add, whenever I saw that certain person around - which if you don't know already was going completely SHY and BASHFUL...   Think I prefer hiding those feelings of mine now through that Actor, "Luke Wilson" because of who he truly remind me of and always!!!

* And that's no joke!   Because if I hadn't mentioned this to all of you before, well the first moment I had stumbled upon one of Luke Wilson's films, called "IDIOCRACY" and saw that Actor on the front of the bloody cover well due to how I felt or possible still do again, for that person fell over...

* Because, I thought to myself, 'what the fucking hell!  As well as thinking 'you what!!! With a little laugh to herself because of how that person makes this girl feel whenever they smiled. Course, that was really why, I think I loved Luke Wilson!

* So, now I can say I love you for that!  But really you should have known that, way back then! When, I truly opened up my heart to them, while a few others was around, which was by acciently mind you...  Saying or shouting out loud, "I love you to bits!!!  If you can fucking remember, you stupid idiot, you! Because, even though, I didn't mean to say it, well what I said to YOU, I MEANT IT!

* But again, thanks!   Because really, and this may sound strange to say, but if I hadn't met this certain person who I thought the absolute world of as well as, I probably wouldn't end up FALLING in head over heels in LOVE with, for the very first time in my entire life, well I wouldn't have known about their DOUBLE, as in look-a-like so very much...