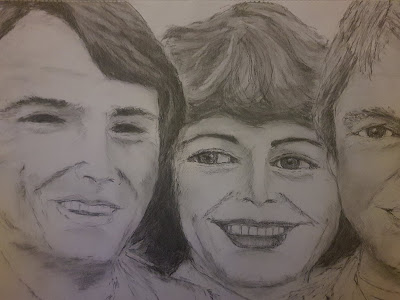 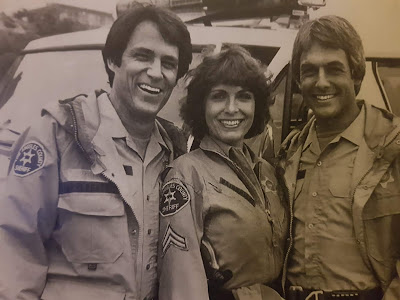 Now, guys!  A lot of you, may not even remember this series.  Which, I can understand, because, this American series that had ran on ABC from 1979 which okay you lot, would have made myself Eleven years old, I think!!!  Course, trying to figure out really of how old I was, well let's put it in another way guys, "I'm totally crap when it comes to Maths-like.  So, all I can say, I think I was Eleven.

Anyway, once again, this series  that was called 240 Robert had first went out onto our screens on 1979 to 1981.  The series title was actually a reference to the call-sign designed for the Los-Angels team.  Which starred "John Bennett" Joanne Cassidy" and finally "Mark Harmon!

Now, viewers, out there!  "If you all recognize at least one of these Actors from this photo above?  Well, you wouldn't be far wrong... Because, "Mark Harmon" appears in NCIS as Leroy Gibbs.

Now, guys!  Don't quote me on what I'm about to tell yeah if it was true or not, it was just something that I heard ages ago about that Actor, Mark Harmon...  Because, if anyone of you out there had heard of an old sitcom series called Mork and Mindy starring "Robin Williams" has our friendly Alien Mork, who had always kept on saying, "Na Who! Na Who!  Well, the Actress who had played Mindy married Mark Harmon!

But, once again guys, don't quote me on whether that was true, because I only heard it a very long time ago.

Anyway, getting back to this very old series, that at the age of eleven-like was totally mad on Mark's character. Or was it???  Hey guys!  Course, at a very young age, this girl was totally mad on BLONDES!  And that's no fecking joke either! I was mad on Blondes with a nice smile and blue eyes!  And boy!  No sooner did I every time clapped eyes on Mark in this series, well all I kept on thinking to myself, was, "Oh Boy! isn't he really nice!!!  Even when I saw him laughing or joining in, course, seeing him back then and in that series, had always made my fuckin' day!  As. I reckon I had liked that in a guy! The smile and that look!  So, every Sunday, between 1ish-like, that Actor, Mark Harmon had always made me smile.

Not forgetting that this series had featured an Helicopter as its most developed character, which if I can also, remember, had big bold numbers above 240 it!