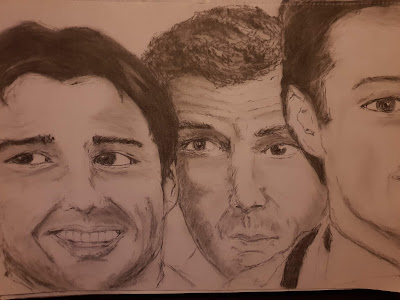 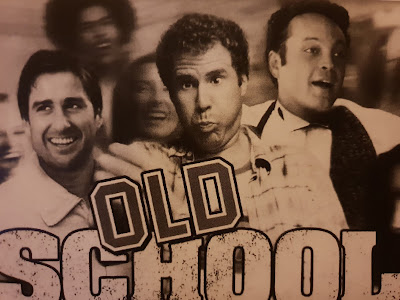 Now, before I start!  I sure love to image, "what if!  These guys,  in this picture above, especially the one that always flaming knocks this girl well out onto Cloud 9 like, would truly think to the drawing that I've drawn of him with the other two???  Hey!  Gorgeous!!!

* Now, guys, if any of yeah out there hasn't really seen this Film of "Old School" well, you should!!! Course, I've seen it loads of times, if not on our screens, well, I put my DVD of it!  And oh boy!
For every single time I've seen it, it cracks me up!  I mean, calling my Gorgeous, which he is...  "Hey!  "The Godfather!

The film was release on 9th May 2003
As, well this film is an American Comedy released by DreamWorks Picture and the Montecito Picture Company - directed by Todd Phillips.

Now, guys, if you haven't really seen this film, you fucking should man!  As it's hilarious!  Blooming hilarious!   As this film is about a guy, a very sexy guy, may I add, since I'm totally smitten with him...  Though, that's not my fault guys!  So, don't think, if you see this, you may be thinking, she must be bloody NUTS! Or something like that, anyway!  Course, every time I look at Luke Wilson, with those big adorable brown eyes as well as seeing that lovely smile...  well, let's just say, he always sends me back to how I once upon a time was...  Which, was very, very Shy and not the way I am now, wacky, but who speaks her mind by standing up to herself!  And  guys, I'm not joking either!  This chick was seriously a very, very Shy kid!!!

* But, getting back to this very funny film, that what it's about, is a guy, who at first, wanted to go back home, from his meeting that he was suppose to be in like, but had asked one of his colleagues, to tape it, so he could see his girlfriend...  But, as he got back home, had discovered his girlfriend "Juliette Lewis" has been participating in a sex-group.  So, Attorney, Mitch "Luke Wilson" feels like now his world as come to an end.

* So, he moves into a new place, which happens to be near a college compass  and tries to get his life together.  Only, with two of his best friends hanging around Mitch's house, Frank and Beanie, who was played by "Will Ferrell" as Frank and "Vince Vaughn" as Beanie, well, lets just say they both had eventually turned the place into a wild party pad, much to the ire of the College's Dean Gordon Pritchard who was played by some Actor called "Jeremy Piven!

Which, in my opinion, when I do watch this film, because of my (Sexy Brown Eyes), always think that that Actor who does play Gordon Dean Pritchard seems a right TWAT!!!