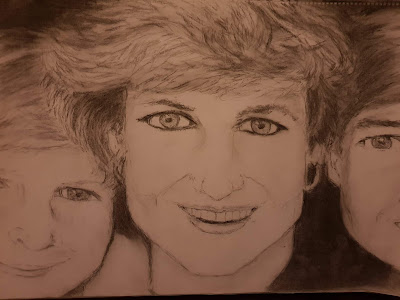 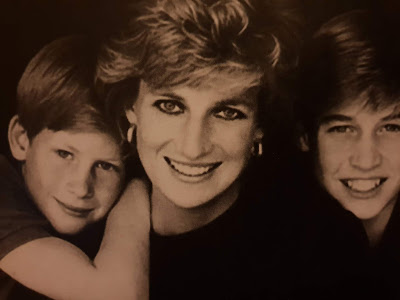 To every one out there, all I'm going to say on this picture I've drawn, is that "I would like to dedicate this, to our two Royal Princes, "Prince Harry" and "Prince William!

In the loving Memory, of their beloved Mother "Princess Diana" who, I'm sure every will still miss her, to this day on.

Posted by dazzlepops68@gmail.com at 11:31 No comments: 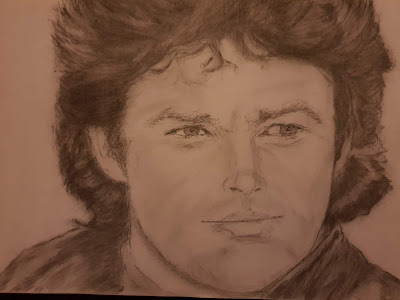 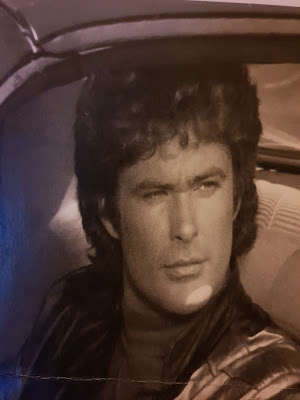 Now, viewer out there, you must have heard of this old 80s TV series called "Knight Rider?  Hey!  As, it starred the well-known Actor back then though, "David Hasseloff!  Who should I say wasn't bad-looking, but, if you must know, was not cup of tea!!!  Meaning, guys!  That, "Mr Hasseloff,"  but who my dad had always made me laugh, course, he had took the PISS by always pronouncing his name, isn't Hasseloff .Sandy!   "But, Hasselnoff or Hasselloff!

Now, first of all guys, this TV series was about a guy, a guy who was a Police Officer at first, but who had got himself shot in the face while going after the baddies.

* But, guy!  Seeing that very actor that played him now, well what the fuck has happened to him?  As, one of my friends had once pointed out to me...
By saying, "Sandy, that actor that played Michael Knight way back then, was quite something!  In other words viewer, what my friend had tried to apply was that, that Actor, "David Hasseloff" was quite handsome when he had played that part in tis series.

But again, seeing him in that Ad for Farm Foods, well that was what I mean by saying what the bloody fuck as happened to him???  Course, okay!  Everyone gets older, but, really, its like he had loads of plastic surgery like all the rest of them, out there!
Posted by dazzlepops68@gmail.com at 11:27 No comments:

The Two Good Looking Guys with the Sexy Smiles 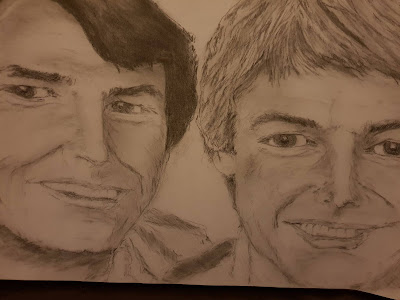 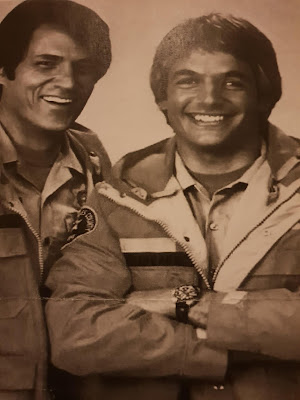 Now, viewers out there!  If you guys, think that you may recently seen these two guys that I've drawn above before?  Well, you're not mistaken or wrong...  Because, these two handsome buggers, that had always got me going back in the 70s as a very young girl, by just smiling away as well as, whenever they start to laugh at something or other had appeared in that old TV Series called "240 Robert" with "Joanna Cassidy."  And as you may now recognize the blonde guy a bit more, to the one that I'd drawn before, well, it's that Actor, that played Leroy Gibbs in NCIS "Mark Harman!
Posted by dazzlepops68@gmail.com at 11:25 No comments: