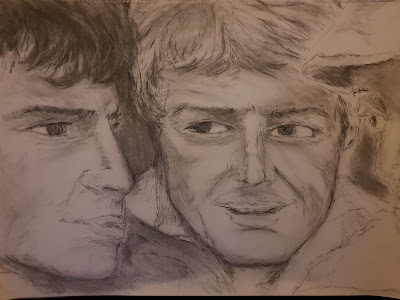 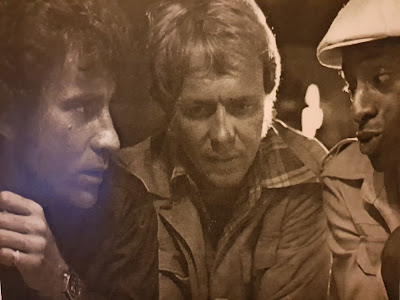 STARSKEY AND HUTCH WITH HUGGY

Hiyeah all you guys out there!  As you can see, I've drawn "Starsky and Hutch"  yet again, only this time, I've drawn them with their flamboyant bad-boy "Huggy-Bear" who was played by "Antonio Fargas," who at times, always got their inside information about what they wanted to know.  As well as, if you guys can remember their Capt. Harold Dobey...  Short for "Capt. Dobey!   But, for who isn't on this picture along with the guys, which you guys can perfectly see!

* Now, if hadn't mentioned it before, well this series was about David Starsky teaming up or should I put it in another word, who he partnered up with...  Which was a more intellectual partner named, "Kenneth 'Hutch' Hutchinson" to protect citizens and patrol the Streets of Bay City.

* Now, this series was based in American as well as you might have gathered it was an action television series...  Which, consisted of a 70 - minute pilot movie as well as, there were 92 episodes!

* But, like I probably said this before, I maybe that age, but, because, I'm definitely like my dad, who had came from Courty Durham, well, I don't look it! Ha! Ha! Ha!

* Anyway, getting back to really this old, but what was the Original series, of one of my favourite Series, "Starsky and Hutch!  As, that was what it was you know guy!  One of my old time series, that I had always liked to watch on either Friday Night around 9pm on BBC1 or on Saturdays, same time.