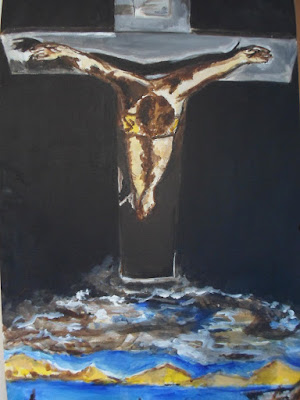 
Right guys! With this paintings that I done of "Christ Looking Down" was while I was still at College those many years ago, I just hope you guys LIKE it! As it's like someone so very SPECIAL, up above is DEFINITE WATCHING OUT FOR EVERYONE!

But I'm not saying that those people who've DONE WRONG to NOT JUST MYSELF in my past "and I do mean MY PAST," which I can tell you there were will be safely looked after! Course they won't! As there's a saying THOSE WHO DID WRONG, WILL ALL COME BACK TO THEM and STAY with them for the rest of their lives! Expect that was my Manager, that had given me that Job in the first place! Course the rest was fucking BASTARDS! And that's NO JOKE! They were ALL utter BASTARDS and ONE a total BITCH that was amongsted them! And who when you saw them can DEFINITELY tell that they looked like a COMPLETE and total SNOB, with their nose in the air. But who also, had really reminded ME of one of those NASTY BULLIES that you get at school, as a bullies!!! "And I certainly mean who was a NASTY ONE! .

So, whether it was from my OLD WORK-PLACE or those that called themselves my Family, since my beloved Dad who I truly loved so much and still do, may I add, had died! As I only see my Dad as my FAMILY! NOT THEM!!! Which I'm sure they know who they are if they saw all this! But again, thank god! That "WHAT COMES AROUND, WILL MOST DEFINITELY ALL COME BACK TO THEM and STAY with them FOREVER!

And that does SADLY include the ONE that I had truly cared about, way back then! And I'm not sorry to say that either, course, they was ONE of these that just couldn't help their FUCKING selves by joining in with the rest of those horrible Shiite BASTARDS! But luckily it all did and will stay with them their rest of their sad lives, even though I cared for them!

A, for myself, well okay! If I hadn't meet this PERSON well I wouldn't have really DISCOVERED or KNOWN that I'm totally SMITTEN with their DOUBLE who does the same thing whenever they were around which had made this girl go so SHY in herself! And that's NO joke! Maybe, it's course I know that I can't get HURT being in love with that PERSON! Course of knowing if they are like the REST of them, out there that ALL they are after is ONE THING and one thing only, which isn't at all what I like in someone as I always wanted to meet SOMEONE that is DECENT and SHY! But who does come around to me, course they may truly like me for who I am!

But as for that person that Okay! May still think of them, which I know I shouldn't but I do, well as theres a saying goes LEAPODS DON'T EVER CHANGE THEIR SPOTS! Which, I am talking about that TRASH now and I'm sure you know what I plainly mean by saying that!

So, really thank god they had really showed their TRUE COLOURS then! As I can certainly tell you right now, I wouldn't want to know ANYONE like that, if all they want is one thing. Course that only really shows that what they are like! Which is showing that they are one GIGANTIC peace of TRASH or one huge peace of FIRTH! Even more so, now! And I'm not even sorry in saying all that now, about that so-call person that I truly had cared about, these many years ago!

Course, frankly that saying "WHAT COMES AROUND AND WILL ALL COME BACK TO THEM! As well as to STAY with them for the rest of their LIVE! As I can say it sure as to that TRASH or SCUM-BAG that me being stupid, still really care about, even though what I just said! It's just really, back then, how they A;; treated me, so they all deserves that WHAT COMES TO THE, WILL ALL COME BACK TO THEM and STAY!

So, viewers out there, if you have already been on my blog or this Web/site of mine or that you are well all that I written down here, PLEASE! Oh very please forgive this girl's language, as I was only letting off some steam! As well as hoping those that had worked at my old work-place then, sure knows how they had truly HURT ME badly! So, just try to understand now, how deeply HURT I was from how they had all treated me! Even more so, that one I still cared so much about! I'm SORRY viewrs!
Posted by dazzlepops68@gmail.com at 08:39