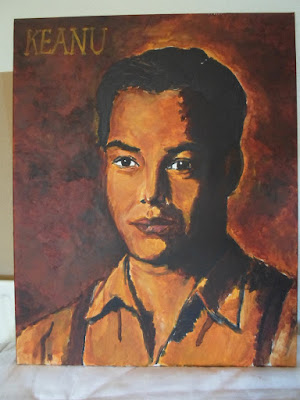 
Well guys! First of all, guess who this is hey? "Na! Well you blooming should know course, it's only little old ME, your friendly, (Dick-Head) or should I basically say guys it's your fucking (Daft as a blooming Fruit-One Bat) with her avenges to strike yet again! Ha! De! Ha! Ha! No! really guys it's only me to show this time just some of my Paintings that I done way back when I was still at College, doing mostly everything that you can possibly think of! But more so, as you guys should know by now, it was my Art that this Crazy Girl was really and utterly Interested in or should that be who loved her Art!


Anyway, getting back to my Paintings that I am now showing you guys which I hope you like course the first as you can plainly see is the Actor, "Keanu Reeves" that first appeared in Bill and Ted, then the Lake House that as the Actress Sandra Bullock but I'm not quite a hundred per cent in that one! Yet, all I do know is that he had been in Films like Speed, The Devils Advocate, Constantine, Parenthood, Rivers Edge, Point Break and most of all you guys should know that he was in The Matrix!!! So, there you are! Keanu Reeves is the first ever Painting that you can see.
Posted by jsm at 11:43