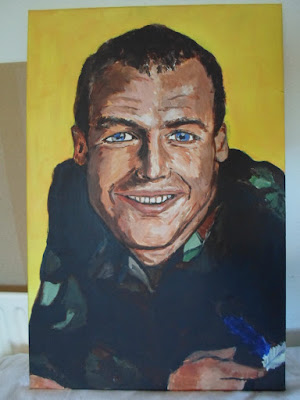 
Now, what can I say about Robson Green! Only that ever since I was seventeen and I do mean SEVENTEEN guys, first noticed Robson in the BBC series Casualty as Jimmy the Porter well it was like I was hypnotist by his lovely smile not forgetting those deep blue eyes of his. And I'm not even joking there! I really did fell under his spell by just looking at him, each time I saw him as Jimmy the Porter, but then again it could have also been his sense of humour that did it! Course, as you should know Robson is a true Geordie.

But in this Painting that I've done of the guy, was while he starred in the well known hit TV series of "Soldier, Soldier" as our lovable, Dave Tucker who couldn't help himself in getting into so much trouble!


But if my Dad was still alive to see this well I'm sorry to say that he wouldn't say Robson is a Geordie! Which Robson, if you are looking on my blog at any time well then please don't take this to hard, will you? Because like yourself man! My beloved Dad who I will always love is also a true Geordie with a sense of humour which you should know very well, that ALL Geordies like yourself like to always have a blooming good laugh and a joke!

Which beings me to tell you that course I had always thought the world of you as an hero of mine then, well my dad had always use to like to wine me up by saying how YOU wasn't a Geordie, but "A NUTTY NODDIE FROM NORTHUMBERLAND."

So, Robbo I'm sorry there, but you have got to understand how my Dad was truly like being a true Geordie himself that came from South Shields "County Durham" But not forgetting me of course, being like my (Bobby-dazzler) Dad as he was also given this NICK-NAME by his Ma, my Nan! Cos, "Geordies HERE, Geordies THERE, Geordies every bloodly WHERE! La! La! La! La! La! La! La! La! La! So, now, I've got you Robson, over and Out!!! Ha! Ha! Ha!
Posted by jsm at 11:44