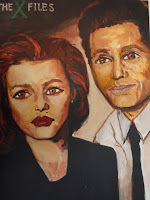 
Now guys! Surely must have heard of the series called "The X Files! If NOT well this well-known and most popular series was about UFOs and it was on around the early 90's I think, because as it's been quite a while I just can't remember the exact year it was on, so I'm sorry there! But once again, I sure hope you guys out there like this! And all I'm going to end on that is "It's SPOOKY Mulder! Hope you get that, if you know of this well-known series and what they call Agent Mulder!
Posted by dazzlepops68@gmail.com at 07:48