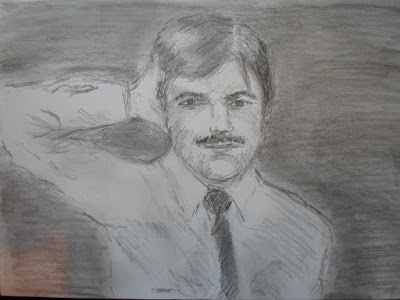 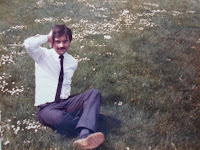 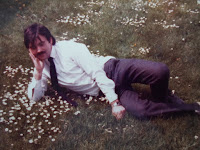 MY ART TEACHER - "DICKIE-POOHS" But, that isn't his real NAME...

* To my Art teacher that I had way back when I was still in The Abbey High School! Thanks for everything you did for me then, and I mean that with all my heart, course if it weren't for you well I would probably won't know what I would be doing now! As well as you know it was you that brought this young girl out of her shell as I was a very SHY young girl when she was seventeen.

* So if you are still around out there and may be looking on my Web-site, who knows! Well this is for YOU, you Crazy guy who as you can see loved to pose.  Course, come on just look at YOURSELF then, lying on the grass as well as that one I've drawn outside the Art Department posing away! But can you remember ME? Hey! Well can YOU! As you knew me by Sandra Dazley! Not Sandy as I'm now known to everyone!

* Also, I will always remember YOU! Being the funniest Teacher back then. especially of how that one time if YOU can recall had asked your STUDENTS that you had in one class which had included ME to do a Model! And being my first one that I had to do way back then, was a "WOMAN" a slightly older WOMAN" in fact, stack Naked posing... Which, course I was really SHY then, like I couldn't say boo to a goose, to anyone even any of the teachers, besides you because like I mentioned, it was "YOURSELF" and YOU only, that had truly brought this young girl out from being truly Shy to having a Wacky Personality - meaning that I was starting to show that I had a WACKY, but BUBBLY sense of humour!

* Anyway, getting back to this one time when we was asked by YOURSELF that this is a TREAT ON ME for this "WOMAN" posing in front of all of us... Course, as I was in total SHOCK by seeing this Modal, had DRAWN on the BIGGEST PAPER her "BOOBIES!!!

* And that's NO joke either! I really had drawn her "BOOBIES" but so it MASSIVE that really had filled the entire my paper that we were given, which as you guys, should know is an A1!!!

* Course, yes guys! This girl way back then, had really drawn this WOMAN'S "BREAST" then rather the actual MODAL "herself" which when we all had finally finished and had to hand our pictures over to him, as you guys can see from the photo above, didn't want to because of what his expression may be!

* As I found him a little CRAZY at times, now weren't YOU! Hey! "Crazy! If you are happen to be looking at this "CRAZY" as in FUNNY as a Hatter!!!  Course YOU had afterwards blooming decided to only pin up my PICTURE that I did of that so massive "BOOBIES" above your ART ROOM door so that everyone that had walked past could see it with my name UNDERNEATH OF IT ALL!!!   Because, you just wouldn't allow me to rub my name OFF from it, which left me really EMBARRASSED!

* Well wouldn't ALL of you guys be? If that had happened to YOURSELVES! And don't say "NO you wouldn't!!! Course, I know that there must be a few of YOU out there that would! It's just it had to happen to MYSELF!

* Now, surely you got to REMEMBER ME, you silly Moo  But again, you will never be forgotten by this girl!  "You silly Dickie-Pooh!
Posted by dazzlepops68@gmail.com at 09:41