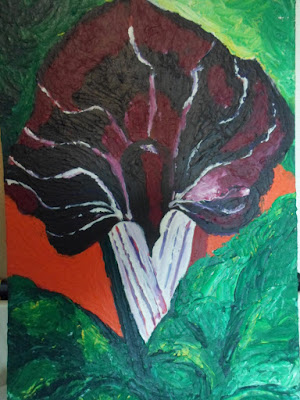 
Right guys! Once again this is just another of O'Keeffe Paintings that I did whist I was still at College those many years ago, but because my two favourite Artist was "Van Gogh" and "Rembrandt" well whenever I used to paint, I sometimes like to pain with a pallet knife then a using a paint-brush which I sometimes had so don't get me wrong! It's just like I said course one of those Artist that I like was "Van Gogh" who had trouble in hearing because it was known that he had cut his ear off! But just don't ask me why! Maybe he was a blooming idiot, who knows even though that he was a well-known and most talented Artist around, well that's ONE of many TALENTED Artist! He must have been STUPID IDIOT don't you guys think? Course, I do!

Anyway, getting back to this Painting of mine called "The Purple Lily" because as you can see it's mostly purple but that was only course I had saw it from one of O'Keeffe' books that I had. So, I hope you like how I painted it like how that idiot "Van Gogh" who if you guys have got a pretty good imagination of knowing anyone like Van Goghv of doing that, then saying while talking to them, but all they may say back to YOU is, "You what! Or "Can you say that again, as I can't hear you properly! Well can you!
Posted by dazzlepops68@gmail.com at 07:51