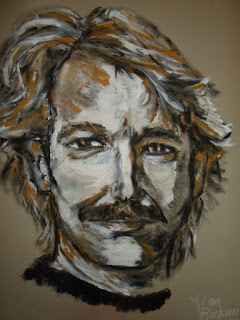 Hi guys! Well these 3 Paintings that you can see, is slightly different to what you guys had saw from last time! Hope you still like it though! Course, as you can see this Portrait that I've done while again, was still in High School is a Portrait of the a very well-known and very talented Actor of "Alan Rickman" who if some can REMEMBER way back, had starred in the Romantic Film called "Truly, Madly, Deeply! Remember now?

Anyway, he did, but in that film he was more like a Ghost that had kept on coming back to his beautiful Sweetheart, that after he died, MISSED him so very much. Which is understandable, but still that was what the film was about! Then, if I can remember he had also starred in the film with Actor, "Kevin Kline" The January Man. I think! Then, if you guys loved the "HARRY POTTERS" films, well he starred in all those films as one of the WIZARDS, which to be perfectly frank, if you saw couldn't exactly MISSED! Because, he was the main Wizzard that had BLACK HAIR! Which normally as BLONDE HAIR!

And once again, he dyed his hair for this Film of "ROBIN HOOD the Prince of Thieves" as the Evil Sheriff of Nottingham. Which he starred along side the Actor Kevin Cosner who had played Robin Hood!

But I've just got to say that if you ever looking onto my Web-site Alan, well you really had looked more SEXY then you had when you had your normal Blonde hair! And I'm not joking there either, YOU really had!!! But I'm not saying that I find you dull with having BLONDE hair of course, it;s just I think you are far more SEXY when YOU had to dye your hair to BLACK for a part in a film!

As I think you are so BRILLIANT in whatever YOU do, just don't even think about ever stopping in ACTING! Okay!
Posted by dazzlepops68@gmail.com at 08:08