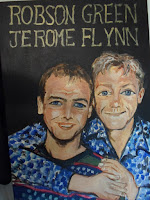 * This Painting that I've done as you can plainly see is of "Robson Green and Jerome Flynn" who I would also like to dedicate to because as they knew way back then I really simply adored them, probably still do, in some ways because I'm NOT just anyone that can switch ON and OFF their feelings of how I felt for those guys then!

* And also way back then, when I was at College well something had told me to do this picture of the them! Because let's just say I really loved them in that well-known TV Series called "Solider, Soldier" can you guy remember that Series? As it was where the guys was discovered by "Simon Cowell" who as you guys should know is from "The X Factor" when they had first sang that well-known song by "The Righteous Brothers" Can you guys Remember???  "Unchained Melody? * Well that's what shocked me the most then, because of hearing those two guys singing in one of the episodes to that Series to just one of many favourite songs of mine! .

* So to end on this NOTE, I'm a person that as got genuine feelings that may be shy but they are DIFINITELY genuine. So, Yes! I do believe that I could still very much like them those guys, even now, but more so of "Robson Green" especially, since I only saw him as my Hero then! And who once again, my beloved Dad had always used to say because he loved winding this girl up while I was always watching him is "He's NOT a Geordie! "But a NUTTY NODDLE FROM NORTHUMBERLAND!  Which of course, got to tell you ALL out there drove this Chick CRAZY!  Course of how I really liked "Robson Green" as my Hero, big time!

* Though saying that also, do you guys want to know that at one time whilst I was in the back garden just looking around mu Dad had suddenly shouted out to me to come on back in because he made out that (Blue Eyes) "Robson Green" was on the TV which as you know if I knew he was on would always have to watch him...

* Anyway, getting back to after my Dad had cried out to me to come back in back so I won't miss seeing Robson on one of the Channels!  As my Dad was standing half-way in-between our living-room door and the floor room door, smiling away course the portable TV in our front was SWITCH ON, I just RUN straight IN without thinking-like course all I thought then, was I didn't want to miss seeing "Robson" on the TV!!!   SWITCHED ON the main TV that was in our living-room, still thinking he's on JUMPED UP and DOWN so many times yelling to myself whilst again my Dad was still watching ME do this for the TV to "blooming hurry up," course I just couldn't wait to see him as well as I was still thinking I didn't want to MISS "Robson" of course! No way!

* Only, guys! And don't laugh!  Even though I reckon you guys probably will, but when it did come ON and I asked my Dad, "what blooming Channel is "Robson on?  Said, "he seems to be on Channel-2 Sandy!  Still very much smiling away at me course, no sooner then I had, that all I saw on the TV scream was the very old TV Comedy Series of "The Addams Family" with their tall butler LURCH walking in saying as usually, "You rang!  Or it could have been from the old Comedy "The Monsters!   Either way, that was what was ON then, thinking I was expecting to be see my Hero, "Robson Green" right there and then!

* Hope you guys though know of what I'm trying to tell you about all this! Course, even myself now especially, have really got to admit to herself that I would see that blooming FUNNY!  I mean guys, just imagine my look on my face when I blooming saw LURCH then, "Robson Green! As I really could have crown my Dad for doing that to me at the time, but I didn't!  Why! Well I don't know why, shall I say guys!!!  Maybe it's course, ME and my Dad are so-alike! That means we both love acting so daft!!!

* As for my Dad though, well I've got to tell you guys, all my Dad did then, was laugh! Laugh! And laugh!   Why! He nearer tripped over by doing so, course of just seeing me as ALWAYS doing something completely daft-like and thinking at that same time that I was really going to see "Robson Green" but I love him anyway!
Posted by dazzlepops68@gmail.com at 07:51