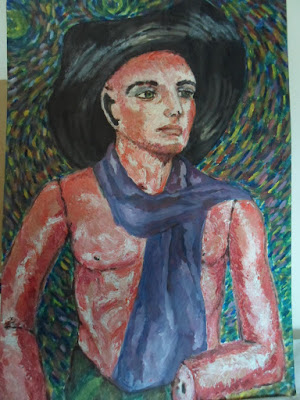 
This painting as you can see was one of my Exams that I did at College that i had pass with flying colours... Like others I may add, which ONE in particular, was a young gorgeous Male Model near to my age, that had dark short wavy hair with dark brown eyes called Steve asking ME as I had ended up on my own, as there was really suppose to be yet another girl with myself of doing this "Semi-Nude Mode"l as part of our EXAM, but had decided at the very last minute that she of course, didn't want to blooming do this ONE, but doing something else, as part of her Exam then, if yo guys, know what I mean!

So, anyway, that meant this GIRL was left to do this on her own which I've just got to tell YOU didn't know what to say when this young Model said in front of me, "NOW, WHAT PART DO YOU WANT ME TO TAKE OFF?

Now, do you see what I'm getting at! When I tell you he asked me "NOW, WHAT PART DO YOU WANT ME TO TAKE OFF? Course, I just didn't know where as well as to what to say, but ALL that this GIRL could say was, "The Top!!! "The Top!!!

Only, guys can you just IMAGINE for moment that this Modal was posing Nude? Well can you! Course if so, well I wouldn't know WHERE to blooming LOOK, even though the guy was a looker! And boy! Do I mean this guy was a looker, as in he was major CUTE! Also, I I would't be at all SURPRISED that I would even get a little HOT in doing this...

Anyway getting back to my painting as you know I used one of my pallet-knifes to do the swivels like how Van Gogh had done to all his well-known paintings! Maybe it was just something about how Van Gogh had inspired me to do my painting like how he had, if you know what I mean? Because using a pallet-knife then a paint brush was to me so easy to Paint. Like showing more textures to how I had paint in the first place! So, I hope you like it! But sadly shortly after we all did our Exams, some stupid idiots as in kids got on top of the roof one night of the Art Block and started a fire, which as you know destroyed the entire Art Block which to me was more like a SECOND HOME! Because of spending more time in there then anyway else!

Luckily for me all my work wasn't in there as I had always stored my Art work in the Cabin where all us students had our coffee break, even my tool-box! But that didn't mean to say I hadn't lost anything, course later on I had found out that someone had took my tool-box that I had always did store it in their storage room.

As for all the rest of the students that did their Art work for their Exams well they had all sadly lost theirs, including one that I'm afraid to say that left their Great, Great Grandmother's Wedding Dress with Veil and Ring as well as their shoes, as it all got burnt with the rest!
Posted by dazzlepops68@gmail.com at 08:38