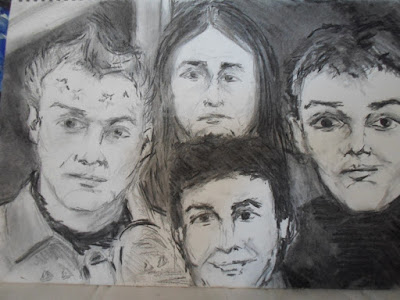 
First of all I like to dedicate this Picture that I've done to ALL of Rick's friends and family because it wasn't just a talent Actor that Actor that made us all laugh which I sure you got to agree guys, because if you haven't heard of this really funny sitcom from the mid 80's I would say called "The Young Ones" well surely YOU must have heard the Comedy Series called "Bottom." Which Rick had starred along side his best mate once again, like he had way back then when they first started in the Sitcom,

Which, I've got to admit even though Rick's Character back then was extremely funny, I thought Viv in The Young Ones was a Class A Act, Meaning as you know I had thought he was more funny, but there again, so was Neil, especially when he always use to say "HEAVY! So, I do hope you guys out there like what you see!

By the way my all time favourite Episode of that Sitcom was actually the very last ONE when you see all of them in a DOUBLE-DECKER BUS singing "We are going on a Summer Holiday," then, seeing them ALL go over a blooming CLIFF! Do you guys get that? Over a blooming Cliff, whilst singing to that one song of "Cliff Richard" which Rick adored so much!

Well all I'm going to say on that is, they sure didn't GO blooming FAR to enjoy themselves! Hey! I mean, guys, going to have a Holiday, away from it all then ending up going over a Cliff! So, all I can say on that is that should have probably teach Rick to love his idol, "Cliff Richard!