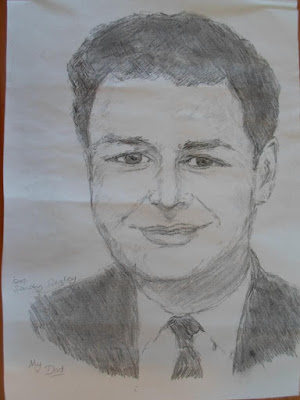 MY DAD - WHO TRULY MEANS THE WHOLE WORLD TO ME!

I SO, LOVE YOU DAD, EVEN THOUGH YOU AREN'T AROUND...

* There is a very good reason of why, I so wanted to draw a portait of my beloved dad whether he was young or not, was that I was far, far more closer to my dad than my sodding mum who was now, a fucking nasty person to not only myself, guys but to my beloved dad!  And that's no joke!  "She fucking a NASTY piece of Chit!!!  And I'm not sorry to say that, even now, she's no long ALIVE!  My horrible Italian MAFIA mum was mostly a really HORRIBLE PERSON to my beloved Dad who I truly love as well, as myself!

* As for my so call "sister" that was, once upon time I see that I had, well ever she got married to a piece of TRASH...  And I certainly do mean who's some fucking piece of TRASH well, first of all, may I say thank god, she doesn't look like my dad but of  my mum side of the family...   Because, viewers, if you must know, she's got NOTHING! NOTHING! And once again, NOTHING!
* And secondly, may I add she's turned into the Creature from the BLACK Lagoon or should that be now a really "BAD EGG," "WITCH" or even better still, who's a really NASTY fucking BITCH!!!  And that's no joke again guys!  That piece of Scum is all those names what I've just mention to you above, of her!!!  Which, is why, I don't feel like I've got a sister anymore!!!  Meaning she's either DEAD my eyes... Or better still, that SCRUM since she Married that BASTARD (which, he is), doesn't EXIST ANYMORE!!!

Only, she actually really thought she's got every thing..  And at time she told me that she thinks I envy her, because, she now Married and got a son!  Which, do you wanna know sumat viewer, if you are looking at this picture of my darling Dad when he was younger, well, I didn't!  And still don't envy that person that once called herself, (A SISTER OF MINE) even though, she doesn't EXIT anymore in my life!!!

As, I think like my dad had said more three times, "I can't bloody believe Anna as made the most BIGGEST MISTAKE of her life by marrying Dean,"  "As, she should have stayed with Mark, (who was her last Boyfriend), or just stayed bloody SINGLE!

In other words, what my dad had truly kept on shouting out shortly after she had that OMEN of theirs and he is a fucking spoilt OMEN NOAH...  Course, if he's any part of Dean who's like THE MASTER from (SALAM'S SLOT) which the "Stephen King"who writes all horrible books had wrote!  As well as it was made a film from the late 70's starring "James Mason" and "David Soul!

Well, first, if that guy, that Anna married is more like that Horrible, horrible MASTER VAMPIRE which was in that FILM "Salam's Slot...  Well Anna much have given birth to an OMEN CHILD, then a HUMAN one!!!   Course, she's to more like a very Hideous VIMPIRER!

Ha! Ha! Ha! I say And that's the TRUTH guys out there!!!  As, well as letting that horrible piece of SCAB called Anna sees this from Georges only Daughter now!  As, she didn't know what both me as well as my Dad had truly thought about her so-called CREEP of a Husband ****!

Whereas, on the other hand, it's only ONE that's got everything...  Cos, I have the same sense of humour like my dad had, as well, as looks!  As, my dad was brought up in "South Sheilds," which, as you guys should know, is in "County Durham" up North. Great sense of humour.  And who had a very funny outlook of life.  But who also, may I add, that is enjoying her life, as he so wanted me too!!!

So, you guys, if you ever SEE someone that really does resemble so much, of her beloved Dad around the Redditch Town Centre well, then, you know its me!!!
Posted by jsm at 00:53