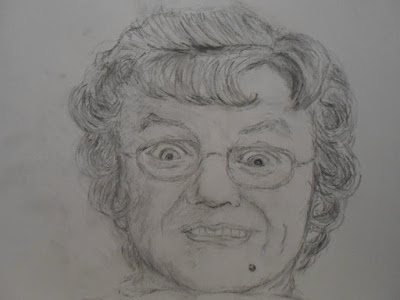 Now, if anyone of you guys doesn't really like "Mrs. Brown Boys" well, let me tell you, you blooming' mad! As it's so funny. So, whoever doesn't like Mrs. Brown can really Feck Off!  Course, in one of Mrs Brown Boys episodes even though they are all funny this ONE was my main Favourite! Why! You may ask, well it's where you see Buster gets Dermot a phone a portable phone for him, probably NICKED!

* Anyway, while seeing it, you see Nick, Cathy's old Boyfriend turning up to explain that he wasn't married while he was with her,which after Cathy tells her Mum that "look who's here?  Not only sees Mick who's the copper, but who Agnes hides that very same phone in the front, which you guys, have got to know it's a guy really dressed up in a blooming woman's out-fit, then who the old Priest "Father Quinn" comes in with "Father Damien!

* While after leaving them with Agnes, Agnes goes and seat at the kitchen table with them, which  YOU then see both Dermot and Buster in the local still dressed as Stupid Opera Singers with a twirly moustaches having a drink but which after trying to find where he's put his new phone asks Buster to RING my phone won't you? " Which, you got to know what's coming up next hey!

* Course, while the two Fathers try to talk to Agnes, there all of a sudden the phone RINGS which is setting off the vibrations in you know WHERE!! ! Where Agnes had hidden the phone! Which all I can basically say was, it was really FUNNY!  Course, ever now and again, Buster RANG Phone, which every blooming time "Father Damien" had tried to say something to our Agnes and "Father Quinn" was trying to listen, well that Phone of Dermot's just wouldn't STOP ringing, which, now, YOU have got to plainly imagine the expression or look on Agnes Face being a MAN!   As I just could not stop myself from laughing!  Course, come on guys, Agnes couldn't ANSWER IT because of wear Agnes had hidden it!!!

* And if you guys can remember in another sense of "Agnes Brown Boys" saying to the Audience "IT'S A MAN DRESSED IN A WOMEN DRESS!!!  Which of course had made all the audience LAUGH!

* Only, once again viewers out there, Agnes could not ANSWER Dermots phone for whenever Buster had rang it for Dermot, while being in their local with him!