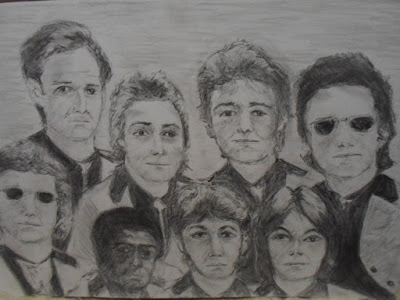 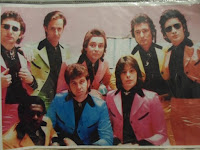 Well, here we are guys, once again, but this time really I've done this especially, for "Dave Bartram" because if it really weren't for him I don't think I would have ever loved Showaddywaddy or him as so much as I do, which was ever since the 70's. So, now, Dave, wherever you may be SMILER, I sure hope YOU are looking at this main picture of ALL you guys that I've done especially for you, even though I already done one for you, which as you should know was a self-portrait of yourself, can always remember those SPECIAL good old memories that YOU may have with the rest of your guys from Showaddwaddy back then!

Even though now, those that I'm sadly to say can't be around anymore, will NEVER IN OUR HEARTS Dave, be FORGOTTEN!!! As we will always, always LOVE and REMEMBER them!

Just think of this my SMILER you! Which you certainly are to ME Dave, as YOU brought the most biggest SMILE on this girls face every time she had saw YOU especially singing away with the rest of Showaddywaddy as well as hearing to ALL your songs that I so love on my CD Player...
But those that sadly can't be with us from the original Showaddywaddy are probably watching all you guys carrying on singing away to ALL those GREAT songs that ALL you guys back then had sang together!!!

So, what I would like to add if you don't mind in me saying is, just think of those TWO tunes that you guys, back then sang called "Heavenly" as well as "Remember then! Because as a ANGEL now, and I'm sure he truly is in Heaven those TWO main tunes I would like for you to always be thinking of them! Like as I just said they we NEVER be FORGOTTEN! As they will be love and remembered by all!

Hope you can cotton on to that Dave though! Cos, just think to two of your songs? "Heavenly," and "REMEMBER then" then Smile while you look to the Heavens above.

And yes! I was referring to only you "Showaddywaddy" I'm truly your Teddy Girl who simply adore YOU!

Sandy Dazley from St, George's Rd, that I sure still hope you truly loved that self-portrait of YOU that I left with the guys! REMEMBER ME now? Well I sure hope you do! As well as the rest of the guys, from Showaddywaddy because it would be so nice to know that I've left a big IMPRESSION on all of YOU after all of you guys had left The Palace Theatre at Redditch last year, around November when one of the guys had celebrate their Birthday!

And guess what Dave Bartram yours truly have even nicked-named her MP-3 Player as her "iPODDYWDDY" as well as nick-naming herself as "The Teddy-Girl for YOU and the rest of the guys from Showaddywaddy!

Do you get it Dave? Sure hope you do! When I said that I've nicked-named her MP-3 Player as her "iPoddywwaddy! Like it? Well I sure hope YOU and the rest of the guys, from Showaddywaddy do!

The thing is though Dave if ONLY I could have really MET YOU when I saw Showaddywaddy for the very first time in my life around November 2014? Because if you must know meeting you would have really made this girls DREAM come true for her! And that's NO joke! As I always ADORED you, since I saw you singing away to "UNDER THE MOON OF LOVE" which you must know already with the rest of the guys from Showaddywaddy on "Top of The Pops" in the 70's when I was at the age of six!

Oh boy! How I adore YOU so! And I certainly d mean I will always ADORE you Dave Bartram
And don't worry, while yours truly, Sandy Dazley is going to be around, YOU and the rest of the guys from SHOWADDYWADDY will never be forgotten as I will always keep SHOWADDYWADDY alive!!!!

By the way Dave! If you are logged on to your you Do you know that next time your group "SHOWADDYWADDY" comes over to Reddtch next year, it will be just only two days after my BIRTHAY! As my Birthday falls on April 27th! So, you could really say even then, would be so special to yours truly because of how YOUR guys, would be coming over-like on the 29th April 2016!

Shame though of how I can't MEET YOU Dave in person for like in saying that's my present from YOU, as that's always been my all time DREAM!