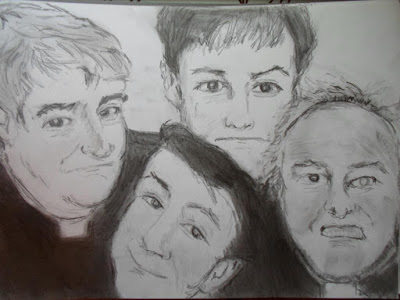 Well, guys, as you know, this picture is from the very well known comedy series "Father Ted" which I've got to admit, was bloodly funny in every way, as well as, it was a Class Act Comedy Series. Because, one mintue, you would see "Mrs. Doyle" saying, "Tea anyone." The other, you may see "Father Dougal McGuire" doing he's usual stupid thing, which could probably be anything! Sending of course, "Father Ted" too his limits, of going a little crazy at times. Which, brings me to "Father Jack Hackett" who, like "Dougal" doesn't help poor "Father Ted," cos, "Jack" is totally Nuts in every way! And I certainly do mean, Nuts, in every way by always saying, "Drink," Feck," "Ass," "Girls."
Posted by dazzlepops68@gmail.com at 09:43