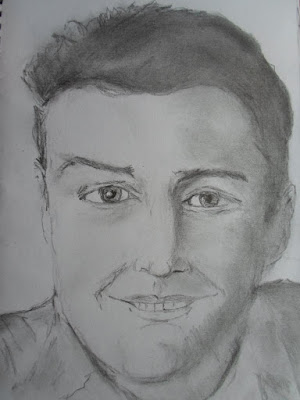 
Now if anyone of you guys had never really seen or heard of this Comdey, called, "Drop the Dead Donkey" well, first, let me tell you that this series had started way back in 1990 til 1998. And secondly, the reason of why I wasnted to draw this picture of "Stephen Tompkinson" as Damien Day was that way back in 2002, when I got myself a job, working in a fashion shop, well, my Manager that had given me that job of course, had truly reminded me of Stephen Tomkinson's Character, "Damien Day."

Not because, that my Manager was tall like the Actor but who also, had the same hair cut like he had, back then, when he played, "Damien Day" and that's no joke! Also, it was the way he acted around us while we were working there, and I'm not joking guys, my Managaer was totally funny.

The only thing was, my Manager was Welsh and loved "Mr. Tom Jones," so, every bloodly time we was around or even myself working or trying too, my Manager would always, always put up his collar and sing "it's not unusall to be loved by anyone," as well as "My! My! My! "Delilah," followed by a stupid but, little dance. Only, the fool as he was, only changed that sang too, "My! My! My! "Oh, Sandy." then the real ture.

Not forgetting, guys, I've just got to tell you that one of our friend's from "Bon' Marhes" got one of her staff to call him, pretending to be a customer called, Mr. G Raff. which after leaving the number, called them back, but he called the bloomin' ZOO then, the shop, asking to speak to a "Mr. G Raff." Which as you should know was a joke.