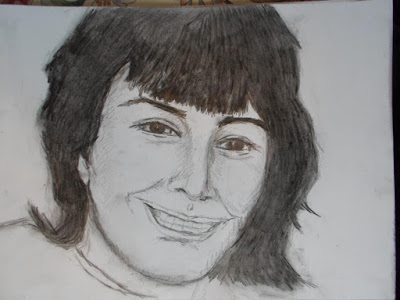 Now, okay! I've drawn "David Cassidy" because at a very younger age, again, I loved watching a series called "The Partridge Family! It was around the same time though that "The Osmonds" as in "Donny Osmond" and all the rest of his family, which same may have liked... But as for myself well all I loved watching as you know by now was "David Cassidy" preforming his songs when he did sang them in that series of "The Partridge Family!

Why! Well again, I think it was basically something about how he Smiled and tilted his head at times when singing to those songs of his...

As I always thought back then, 'Oh boy! David, you simply done it again, which was nice, so don't get me wrong, but for making this very young girl as I was then, to simply go all bashful-like in herself with a smile on her face because all that I was simply doing was seeing him singing!
Posted by jsm at 08:22