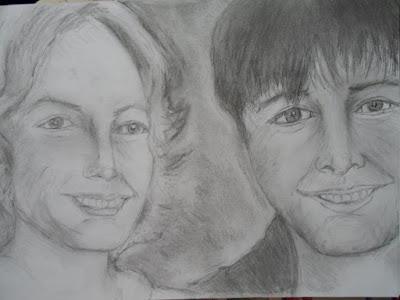 * If you guys want to really know of why I had drawn these two Actors, is because the film that they had both starred in is called, "Never Been Kissed" which, okay! is one of my all time favourite films, until, I came across the film with "Luke Wilson" in called, "The Wendell Baker Story! As I now thought that's more Romantic than the film "Never Been Kissed! Even though, whenever I watch it, I end up crying, because of how "Drew Barrymore's" character waited for her love, Sam, down at the Basketball Court, thinking that he would not turn up, but finding out that when he does well as soon as I see them kissing as they do, one of my favourite tunes from "The Beach Boys" comes on which is "Don't Worry Baby!

* But what I think I liked more about this film before knowing that I really liked "Wendell Baker Story" starring that adorable "Luke Wilson" who I'm totally smitten with because of knowing someone in my past is that every single time I had put this film "NEVER BEEN KISSED" it made me think of how "Draw Barrymore's" character was like more MYSELF!

* Just please don't laugh guys, because like the titled to that film "NEVER BEEN KISSED" well this girl now in her forties as still never in her entire life been KISSED by someone that she may have truly adored...

* Because all my life I had either been bullied at school, picked on at my old work-place or just simply been pushed to one corners by my own sister who really made me feel I was like a black sheep, which if any of you guys don't know what that means, well that's just an expression of saying I'm more prettier then YOU are! Because she really had always made me feel that I was completely NOTHING and that like others may say DON'T THINK YOU MAY BE LIKED BY SOMEONE IN THAT WAY...

* Is that sister of mine JEALOUS because I'm HAPPY and doing what my beloved dad had told ME to do before we found out he was going to died!
Which was really told ME to, "just ENJOY my life whether I get invited out by friends or not! "Just ENJOY your life Sandy! Which I am

* Anyway, there you have it guys! This GIRL is still a total "DREAMER" course I've "NEVER BEEN KISSED! But just still DREAMING to what's it really liked to be swept up off my feet by someone without knowing like that they could be just around! See I told you guys, I'm a total ROMANTIC!
Posted by jsm at 08:15