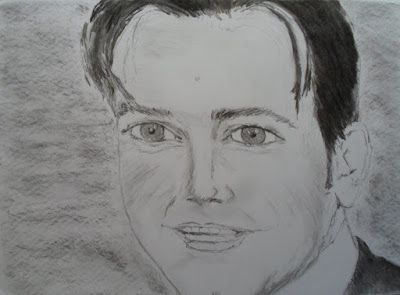 Now first of all, if you "Ewen McGreghor" will happen to oame across to this Web-site of mine one day well let me just say when I first saw your film "Moulin Rouge" my first thoughts of it was just okay! But the more I watched the more I just couldn't stopped looking at YOU because once again as mu mind wondetred all that I was thinking was "Cor! Don't you look fucking Sexy!

I mean Ewen" Instead your usual fair hair, that dark hair that you probably dyed it for the film, had really suited you a lot more. And with that fucking look of yours, incuding that smile well oh boy! Was this girl getting herself HOT - course, you seriously have got such a lovely smile!

Shame though, that you probably did dye you hair for that film, course it does really suit you, you know!

Anyway, for all of you out there now, has you probably gathered this picture that I've drawn is a picture of the young Actor then, "Ewen Mcgregor" that had starred in Moulin Rouge!

The film was really about a celebration of love and creative inspiration that takes place in the infamous gaudy and glamorous Parisian nightclubs at the crisp of the 20th Century.

And of a young poet (Ewen McGregor) who is plunged into the heady world of Moulin Rouge that begins a passionate affair with the lovely Nichole Kidman.
Posted by dazzlepops68@gmail.com at 06:53