The Likely Lads - Terry and Bob 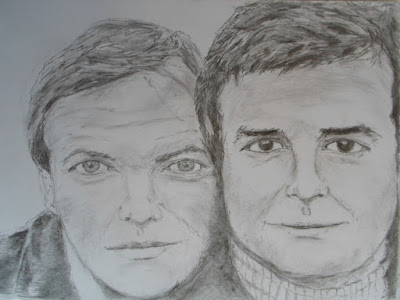 THE LIKELY LADS - TERRY AND BOB


The Likely Lads is a English sitcom or was should I really say, since it's not ON-like, created by Dick Clement and Ian Ia Frenals as well as produced. The first episode of this so-call comedy !had went out on December 16th 1964, till July 23th 1966!

It's about Terry and Bob if any of you don't really know of this... Terry was played by the very well-known loved Actor "James Bolam" and Bob was played by "Rodney Bewes!

Now, in this sitcom comedy series you see our Terry is devoiced from his German wife and then has a Finnish girlfriend called Christina. As for Bob, well he ends up marrying Thelma!

They say, "The Likely Lads" is more like the original to Men Behaving Badly...

Later, they even did a sequel-like to The Likely Lads called "Whatever Happened To The Likely Lads, it was around 9th January 1973 that they broadcast this till 9th April 1974 on BBC 1 - it was the colour sequel to the mid 1960's hit "The Likely Lads!

Even though they may be well-known to all and love! I personally again, just can't stand the fucking pair, course there's just something about them that ever since I saw them in "Biker Grove" which was a kids programme, way back in the mid 80's I think! Course first of all who really would want to remember that, hey? Not me! That's a fact, because even that was really and totally fucking CRAP!!! And that's no mistake, you two guys, and I am talking to "Ant and blooming Deck" if you're seeing this, are just two JERKS!

Yes guys! You two are just two fucking JERKS that I really, really don't like and most of all can't understand why, anyone that is, had allowed YOU guys to really continue in show business after starring in "Biker Grove" that so many years ago!

Because viewers out there if any of you didn't know already, well most of those young kids then, became famous through that... But how sad! That's all I'm going to say on that!

Anyway, if you two - and I am talking to those two fucking idiots of "Ant and Deck" you sure can't ever try to be or take over those brilliant Actors and I do mean, they were so brilliant in that original sitcom series, James Bolam and Rodney Bewes!
Posted by dazzlepops68@gmail.com at 06:26