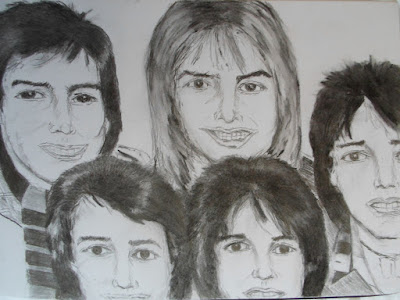 
* First! I know this picture that I drawn may seemed a bit odd or should you say to yourselves, "but wheres the two guys faces down below??? Because half of their faces seemed to be missing! Well, first of all that was intently, because you wouldn't want to see a drawing of mine that had the guys smaller! As I thought also, if I had drawn this a bit bigger, then maybe all you guys would or could see my drawing a lot better!

* So, before you guys say something or think something! I know! It's SAD! I mean, "Bay City Rollers" for fuck sake! But, I only drawn it first because someone's dad had sort have given me the idea to draw the guys, like a dare! Which, once upon time if someone dared me to do something, well stupid Muggings, had always thought SHOULD I DO IT THEN! And secondly, it wasn't that I was totally CRAZY for this boy band that preformed in the early 70's way before, "Showaddywaddy" reappeared!

* And I know what all of you must be thinking! What's the fucking difference between liking The Bay City Rollers and Showaddywaddy back then? Well, for me, I did like The Bay City Rollers, but that was ONLY "mind you," when I was five years old or maybe coming to being six when I did use to like listening to songs, course, there was one that was always my favourite which was called "Bye! Bye Baby! Which every fucking time heard this song, couldn't help herself from trying even that age like, to sing to that tune!!!

* But, once again no sooner then this girl heard her guys, which I had liked to refer of Showaddywaddy because, oh boy! When I saw all of them wearing those Teddy-boys out fits, which what it was, as well as heard all their songs I MELT!!!

* But, really it was just seeing their Lead Singer back then "Dave Bartram" smile whenever he sang any of the songs - more so, to "Under The Moon Of Love! Because, that just thrown me over, while seeing him singing away with his lovely smile! And this was a six year old girl that just couldn't help herself from smiling a lot more when she saw his smile and singing to all their songs!

* But, coming back to this boy band of "The Bay City Rollers" back from the 70's, because I would like to dedicate this picture to someone that really knew my beloved Dad those name is Steve, "Steve Mitchell! Because even, from this day on, the guy is totally Mad on them!  Like I was those many, many years ago, even though, I may like still listening to their Songs now!

* As he's a bit like me, that loves all music from the past, so, Steve this picture is especially for you! Hope you like it if you go onto my Web-site that is?

First of I would like to thank "Les McKeown" for making my night when he came over to the Redditch Place Theatre on the 25th of August this year.  Course, if you happen to see this Les, I was the second row from the TOP...   Singing my heart away to all of your songs!
As I truly loved it, because you took me back to those good times, of me seeing you guys, performing on Top Of the Pops2!  My favourite song and still is was, "Bye, bye baby!  "Baby Goodbye!
Posted by dazzlepops68@gmail.com at 06:30