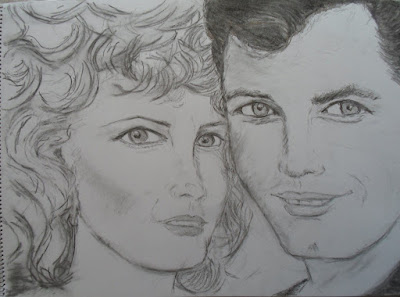 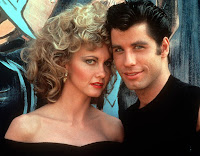 * Hi guys! Well as you can see I've drawn theses two well-known Actors from that very well-known film of all time then, even now shall I say "Grease! So, I hope you like!

* And if any of you aren't really or completely sure exactly to when this film went out or should I say was released, well It was released on September 14th 1978!

* And around then, this well-known film of "Grease" was a very most successful Movies of Musical of all time...  Why! It could well still be, who knows exactly course, as you guys should know by now, since it went out there must have been other films

* Anyway, getting back to this well-known and may I say popular film of "Grease" course, it was mainly about a wholesome exchange student called Sandy Olson played by the beautiful Actress, "Olivia Newton John" who at first you see the two Actors running around chasing each other on a beach, having a final summer romance of being together then ending up really saying, "well Sandy does... "Why, does it have to end Danny?  Which you then see Danny replying back, "it's not the end, it's only the beginning!

* Which just before you then see the entire film start, if I can remember that is because there's a good reason of why I don't watch this very old favorite film of mine because ever since I was in High School, well every fucking day when this one lad had always saw me coming he sang that tune from the film 'Oh Sandy, can't you see and so on, if you get the message!

* Anyway, once again, before you see the film really start all that I can well remember of seeing is them two kissing which I always thoughts that was so nice!  Really, but until that idiot at High School had always and I do mean fucking ALWAYS guys sang that song course, of my name being Sandy of course!

* But there was one particular song I've got to say from that film that I truly liked and that was that sense where you all see our Danny "John Travolta" jumping on a white Hell's Chariot car, if I'm not mistaken, by not only himself but with all his other mates!

* So, can you guys remember???  The tune Grease-Lighting!

* Anyway, getting back to how Sandy Olson had really came to Randell High because, it's when you finally see Frenchy one of the characters in the film played by Actress "Didi Conn" Sandy to the rest of the gang at Randell High!  But to their surprise, while they meet Sandy and Sandy tells a bit about herself or should I say how she spent her Summer well that's when they all find out that she knows Danny, Danny Zuko who was played by our "John Travolta!!!

* Now, as you guys should know already, Danny was more like a "popular guy at Randell High" with all... So, really you can just imagine when he realised that Sandy had suddenly came to Randell course of being around his mates has like a head guy, so to speak!

* Only, can I say to all of you out there, just imagine what if all those Actors that played in that well-known loved Musical Film of Grease what they would think if they came across to this Web-site of mine and saw this picture that I've drawn of "John Travola" and "Olivia Newton John" that played the lead roles really to this film of Sandy Olson and Danny Zuko??? Hey! Well can yeah!