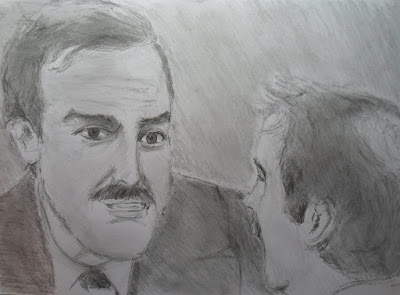 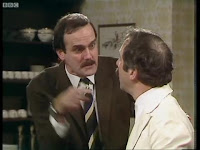 Now, everyone should fucking know this great sitcom series "Fawlty Towers" starring "John Clesse" who was absolutely awesome as Basil Fawlty and others that was also great in that very popular Comedy series, like "Andrew Sachs" who as you guys should know, had played "Manuel" so brilliantly, because for (1) - It was mainly that he had always kept on saying every now and again, "I'm from BARCELONA! With that daft look on his face or should I say with a stupid grin on his face as well as "John Cleese" as our "Basil slapping his head at times!

And if no one knew this, "Fawlty Towers" was in fact, first broadcast on the BBC 2 in Sept 19th 1975 from 1979 I think! As they only made twelve episodes. And without a doubt, "Fawlty Towers" has many classic lines mostly delivered from the man himself Basil...

But would you believe it as been in fact, 40 years since it's been on-like, well would you! Because it sure as been as well as it's more popular then ever...

Now, if anyone of you guys would ask me "which episode was your most favourite Sandy? Well I would have to say it was the one that if I can remember, an hotel inspector was due to inspect the Basil's Hotel, only to discover through Manuel's room that he had kept a (FEDERGREE HAMSTER) in a fairly large cage near to his bed, which what Manuel had probably tried to say, "my PEDIGREE HAMSTER," which he had called, BASIL!!!

Only, to find out that while Basil was yelling at him as always but to "get the bloody thing OUT from the hotel, before an Hotel Inspector was due to arrive! Manuel was also told by Basil that "it's a RAT not a bloody HAMSTER, A RAT! Because Manuel had all along kept this thing in his room from the moment he was there.

Which after finding Polly around down stairs, told her that Mr.Fawlty had tried to tell me that (BASIL) my Hamster was a RAT! Which probably thinking to himself that Polly was going to say "take no notice Manuel! She actually told Manuel to "prepare yourself Manuel! Because it was then and only then, that she had told him that it was a RAT Manuel! And so, with the Hotel inspector was due to come Polly then told him that "don't worry Manuel, I know where we can put him," which she led him with the rodent in it's cage to the back outside.

Yet, once again guys, the next CLIP that you see is Manuel going straight outside to feed his FEDIGREE HAMSTER as he normally says in that episode about his beloved HAMSTER - is NOT! Because, as he thought he needed to be fed then, well all we see is Manuel opening a white door to a shed to feed his pet and bending over with the most silly grin on his face, he said while rubbing his hands as if he was washing them cried out BASIL!!! Which, as we already knew... Was probably for me, the most funny part to that episode because of the way Manuel had just kept crying out to this thing, "Basil! "Basil!

Though, not forgetting as well that CLIP where we all see that moment where the Hotel Inspector is not just sitting down at a table looking at a Menu but also, it was where Basil had handed him a Biscuit tin which before opening it up, had thought WOULD YOU LIKE A BISCUIT OR TWO!!!
To only discover that when he had, well while noticing poor Manuel was running around the place because he was trying to find where his pet BASIL was hiding - well what should pop up in that BISCUIT TIN that Basil was just about to hand over to the Hotel Inspector, but that bloody RAT of Manuel's! Which again was so FUNNY because of the look on Basil's face when he really finally discovers there right in front of everyone to see was that dam RAT...

Only guys, the way it had popped up as it did was like a stupid pop-up TOY similar to one of those JACK-IN-THE BOXES! Or if not, like one of those ridiculous things that we probably do tend to see at times!

Also guys! There was that blooming episode where you see Basil hires his usual incompetent builder, O'Reilly to do some of the carpentry around the hotel lobby while he and Sybil goes out for the afternoon, leaving Polly in charge while they get back. But while Polly decides to have a nap left Manuel on call that is, until the builders come or anyone if needed!

Only to discover on their return, that this so-call Irish builder "O'Reilly" that came while Manuel was so busy but did try to awakening Polly from her nap but didn't! Ended up blocking off the part where the dining-room was with a solid wall not to mention where the door to the kitchen was, which, Sybil says to Basil "I-told you so!

But viewers, that isn't what I thought was most funny again, even though I had mentioned that episode from Fawlty Towers called THE BUILDERS... Because, if I'm not mistaken the part I would also like to share with you all, is probably from that episode THE GERMAN! Why! You may add, well it's the way that stupid giant of a Moose's head had fallen right-bang onto Basil's head, while Basil tries to put the blooming head of the Moose correctly!

But it's was more to what happened later on from that episode, that I personally had thought it was absolutely so FUNNY... Course, it was where we all see that old befuddled "Major Gowen" talking to that Moose's head while it was placed on top of the desk at the reception, because he had thought it had spoken to him!

And yes! I did say where that old idiot had thought it had spoken to him! Not knowing though, that all along it was Manuel talking. As he was actually leaning behind the desk talking to himself like he was the BOSS of the place, because as the result of that blow that Basil had from that Moose's head, well Basil had to go into hospital to be checked out properly!

Not forgetting, if you can remember, that part where shortly after Basil escapes from the hospital from the result of that bang on his head... Thinking that he was perfectly alright and no need to be still in the hospital even though his doctors had told him, "Mr Fawlty, you shouldn't be going just yet, as we still need to take some more tests," which as you know Basil didn't listen to them as he just thought don't be stupid, as I'm perfectly alright!!!

Anyway, getting back to where you now see Basil still wearing that bandage on his head in the hotel after he escapes from the hospital of course, because as you know this episode was from THE GERMANS where now you see some Germans sitting around a table in the diner, waiting to be served by Manuel but where Basil ends up barraging in by first saying loads of things which he couldn't help mentioning the word - WAR in any conversation that he was trying to say to them.

Which, as you viewers out there should know, that's if you have seen this one particular episode to Fawlty Towers - Basil ends up doing that FUNNY, STUPID walk with one leg right up and then the other!!! If you know what I mean... For it was the way he tries to walk like Germans had way back when they were at WAR - plus guys, Basil had indicted he was the EVIL dictator in History which, I won't mention, but, just say by putting one of his fingers under his nose and the other, putting his arm right up, but slanting at times!

But guys! You must remember that all this, was due down to that blooming big BUMP that he had from that Moose's HEAD that while trying to put it straight, had fallen right-bang on top of it! Not forgetting of course, that while he was hospital and before escaping, he didn't listen to what his doctor was trying to tell him about YOU MUST STAY IN BED Mr Fawlty!!! 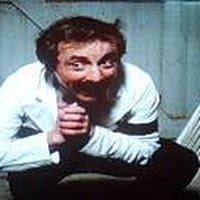 
As you gathered guys, this clip from "Basil the Rat" was just one of my favourite CLIPS as there was one more which you should know, was seeing at the end before it finishes, Basil handing the hotel Inspector a box of biscuits in the diner but when he opens it finds that there right in front of their eyes to see was Manuel's fucking Basil the RAT!!!
Posted by dazzlepops68@gmail.com at 05:58