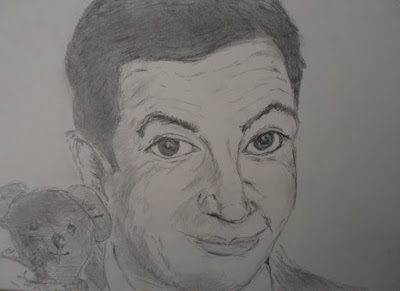 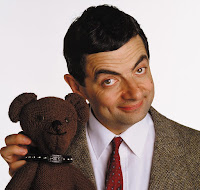 
Now, first of all guys, there's no fucking way I would put "Mr Bean" under the category as a blooming good-looking guy or simply saying "Cor! "Isn't he absolutely gorgeous," because come on, even though this Crazy Chick may see to herself at times as I'm just (ONE SCARY thing) as got some taste, as in noticing who is or who isn't good-LOOKING shall I say! And Mr Bean isn't one of them once again... I mean with the expressions he gives us when he does those stupid looks on his face to try to speak to anyone, not forgetting to his beloved TEDDY!!!

But what I think of the "Rowan Atkinson" the Comedy Actor that plays him, well that's completely different because as a Comedy Actor, I think he's absolutely FUNNY that's all though!

For instance, take one of those silly films that he made called Bean - "The ULTIMATE DISASTER MOVIE" because after seeing that his bosses at the British formidable Royal National Gallery want to fire him but had ended up transferring him to America instead which, if you can remember guys? In that film "Rowan Atkinson" goes to stay with a family of someone that works in one of the Gallery's over in America...

Only, while Bean does stay with Dave Langley and his family, who shall I say at first sight doesn't say much about him, until that is stupid little accidents occurs around their house which as you should gathered always involves him as usual!!!

But getting back to our supernaturally clumsy "Mr Bean" as a care-taker that he gets entrusted with one of the most well-known Paintings ever called the "Whistler's Mother" for whom was painted, if I'm not mistaken, by an Artist called "James McNeil Whistler who could well be related to the Whistler's Mother! Who knows there, only that it was this Artist that had painted it! Before, General Newton who was played by our faithful loveable "Smoky and the Bandit" star, "Burt Reynolds" if you guys can remember him? Hey! As he always had a the most unusual loud and funny laugh ever!

Anyway, like I said way before the General was due to come to show that famous painting for everyone to see, Bean as always did something that no other would probably do, if they had some common sense. And that was, while left alone for a while, Bean went to this well-known Painting so close and sneezed right-bang upon the Whistler's Mother face. Which, being "Bean" had decided to rub this of the the famous painting with one of his handkerchief that he had, and I certainly mean RUBBING IT so hard guys, discovered that while rubbing it, he found out that his HANDKERCHIEF had what looked-like one big dirty mark!

Which as you gathered, had certainly left one enormous mark of her face as I just tried to mention... And being Bean of course, well that was where the idiot made that painting much, much worst as it was already! Because if you haven't seen that film of BEAN, well what happened next was that as he thought he could try to reappear the painting by taking the actual Painting from the frame without letting anyone seeing it, so if he could try to get that stain off, could then return the painting back to it's righteous place, so no one would actually be any more the wiser! If you know what I'm trying to say to you all!

Though, while the clumsy-idiot as he is, "Bean" went into a small stock-room that was filled with all sort of things like spirits to re-move stains, Tins of paints, and certain other chemicals that you could possible imagine that involves the Art Gallery. Also, such as pencils, knife-platelets and paint brushes in different sizes, Bean had suddenly picked up what he thought would re-move that Big BLACK stain that was still there...

Only, what Bean had gone and done for trying to take that big BLACK stain that he did, was he picked up some unknown paint-varnish and with his handkerchief had put a small dollop of this onto it and rubbed as hard as he could, thinking to himself that he will eventually removed that stain that he had done, from that famous painting!

Yet, it was only after removing this cloth that did Bean discover by that painting that what he had done was even much worst then seeing a blooming great big black mark that was. Because what you see next would probably make you guys laugh so much! And why, you may add, well it's because after thinking he had removed that awful mark with what he probably thought was some kind of remover for any stains noticed what he had done was REMOVE the hole blooming FACE of the Whistler's Mother!

Which after panicking so, and guys, I really do mean PANICKING he thought with that silly grin on his face, ha! Ha! I've got an idea to try and do something! But guess what Bean had decided to do next? Hey! Course, first of all, all I'm going to say is, did anyone of YOU out there while you were younger maybe, at school-like did loads of doodling? Because, oh boy! What "Bean" had gone and done was so ridiculous for trying to think no one would probably NOTICE-LIKE...

As he just simply drawn a very big and stupid HEAD where the Whistler's Mother's head once was, because there was a clear Canvas patch that was the result to what Bean had just gone and done, did you guys, did some doodling as a youngster? With two huge eyes adding a little dot to indicting the eye-ball, a very, very big CONK that as you would draw a huge balloon going towards you from their face not forgetting putting a silly smile to this bold-headed face? Hey! Because that's what Bean had done!!!

Then, once again guys, he tried to take this well-known painting straight back without anyone to see if they had past past him by, that what he had hidden underneath a very big sheet was that painting. So, when he gets back, can put it back in it's frame and then store it back behind a false wall that was, until the General would come to reopen, so people could come and see it!

But, before General Newton had come to re-open it, Dave Langley was shown by Bean, because as he noticed something about Bean that what I think had got him suspicious about him... So, while Bean tried to say prepare yourself! Slowly pressed the button that triggered the false-wall to re-open, so, where once "Whistlers Mother" painting was, was now one gigantic huge bold-head man face with one silly big eye and a biggest conk you would not believe again, that was more like a balloon going way out! As well as that silly smile don't forget, then the Whistler;s Mother face!

Only, that was when disaster struck, because the expression you then see on Dave's face had showed every thing... Because of really finding out that what Bean had gone and done to this actual well-known painting that he was told way before he was left alone by Dave himself, "DON'T TOUCH THIS PAINTING Bean or EITHER GO NEAR TO IT was now one hell of a painting that was so ruined big time alright!!!

Cos, oh boy! If any of YOU are simply like (Muggins) here! Which I am talking about myself mind you, will get what I am on about by simply telling you all, Bean had really ruined this blooming painting of - The Whistler's Mother! okay viewers! So, again, watch this SPACE? As, I will or hopefully try to show all of you this, Oh-so - FABULOUS and Exquisite painting that he tried to fix by re-doing the face of The Whistler's Mothers head!

But, I tell you something guys! Knowing what know is good Art or isn't, is that if Bean was still at School as a youngster and entered this for one of his Art Exams as his version of that well-known painting or even a Student from College which I can't see that from happening... Well he wouldn't pass with flying Colours! Course, he would get a blooming (F) or an (U) if he was in any Art Class for sure. 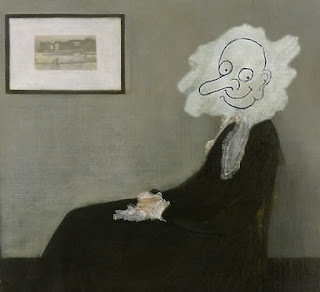 So, guys! As promised, what do you really think of this oh-so blooming amazing, NEW Version of "The Whistler's Mother's face" from the man himself Bean? Hey!!! RUBBISH! FUNNY or My god! That's fucking BRILLIANT Bean! Brilliant!

Because truly guys, if I hadn't already said this, the very first time that I saw this film of BEAN - The Ultimate Disaster Movie well I just couldn't help myself from laughing so much, I mean come on guys, just look at that FACE?

Course, if all of YOU can out there! Well can you first just imagine, if any of you that is as a blooming good sense of humour "such as myself" that is, but who loves seeing any fucking old Western films or let's say it can be even just any films that's like recent ones, including comedy westerns, such as "Shanghai Noon" or "Shanghai Knights" for example! Because it was sort of like those films that I was really referring to... Which, starred in both those two very well-known, but talented Actors as well as who was so FUNNY in them, Actors, "Jackie Chan" and "Owen Wilson!

Because, it was also, basically asking all you guys to just IMAGINE those WANTED POSTERS that you do see of all those baddies, but with a face like that STUPID drawing of what Bean had drawn as you can see above??? Hey! Well can you? But saying "WANTED! - "The Big Conk" 1p DEAD OR alive!!!
Posted by jsm at 11:12