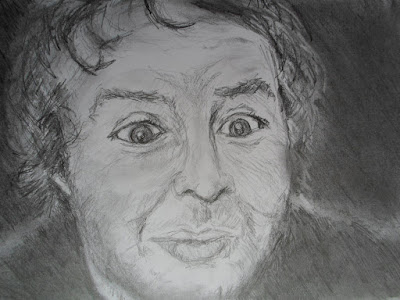 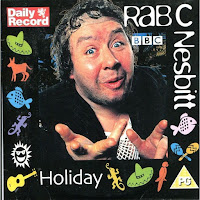 
Yes guys! As you can see, I've now carried on with drawing well-known people then just drawing anyone or anything that all of you may NOT recognise, if you know what I mean!

Anyway, this picture which I'm sure you guys should bloody know is "Rab C Nesbitt" because if NOT! Well all I can basically say to you is that YOU all must be fuckin' stupid because it was a very well known Comedy Series while it was on-like!

Rab C Nesbitt was a Scottish Comedy series which if no one really knew, began in 1988... Produced by the BBC Scotland and starred as Rab was the Comedian Actor "Gregor Fisher" as that Alcoholic Glasgow git! And yes guys, you did hear me say as a blooming stupid old GIT or FART may I also, add!!!

Who as you probably know by now, was an unemployment lifestyle choice for us to watch, the first ever episode was put on, on the 21st December 1988 which lasted from till the 2nd of January 2014.

And which I didn't realised until recently that is, is that while I was over at my Neighbours one evening with his girlfriend, typing away something on my Web-site they had decided to put on one of the episodes from "Rab C Nesbitt" because they had really wanted me to recognise this someone that I should know very well as they both kept telling yours truly, after putting this CLIP on, from this certain episode, which this person was on!

Only, no sooner then I had saw this person that they both wanted me to see well let's just say I was "gob-smack" because of who this person WAS!!! Which meant as you guys know, I had RECOGNISED this Actor IMMEDIATELY and I do mean immediately... Because guys, guess who I saw dressed as a transsexual barmaid? Yes guys! I did say who was dressed as a transsexual barmaid! But "David Tennant" who once starred as our Dr WHO! Can you guys remember? Maybe not! Because it was a while ago that he was our loveable Dr to same that is! To others well they probably liked another Actor that had played the character.

Anyway, getting back to "David Tennant" who really had starred this transsexual barmaid called "Davina" and that's NO fucking joke, it really was HIM! And boy! No matter how I also liked him as (Dr Who) well seeing him dressed up in an out-fit that so looked-like the Country Western Singer, "Dolly Parton" in some ways, because of those very, very big Boobs that whoever it was that was responsible in making David look good or so FUNNY as this character, because it was absolutely funny, you know seeing this CLIP of "David Tennant" dressed as a fucking (WOMAN) with big TITS that really had looked-like to me, was going the OPPOSITE ways to one another... Course, it just did't seem like it was right

And yes! I did say that he had big BOOBIES that you just couldn't MISS by noticing, if you also saw what I had with what looked-like David's very hairy chest showing just slightly in-between! If you know what I mean!

But guys, I will warn you, if you haven't seen it but would like to now, well if you like "Rab C Nesbitt" that is, well all I'm going to say is, he really looked FUCKING UGLY as a W.O.M.A.N even though he was suppose to be a transsexual in it!

I'm sorry David! if you do happen to see this Web-site of mine, but you were you know, you did look absolutely Ugly! For you had really reminded me of that stupid PLASTIC DOLL that Dorian, played by "Lesley Joseph" in one of the episode of "Birds of a Feather" which, if I can remember, was a Christmas episode because the plastic doll was suppose to be a blooming FAIRY! Which funny enough, Dorian had split that ugly doll's leg apart like she was doing the SPLITS because of the way she was! But who knows, she probably did it because like myself guys, thought this horrible doll that was Tracy and Sharon's only fairy I think was just that! Fucking horrible!!!

So, with that look that David Tennant had really showed as a transsexual barmaid called, "Davina" in Rab C Nesbitt Comedy series had made me think he could well be just ANOTHER UGLY FUCKING FAIRY like that Plastic Dolly that Dorian had so split it's blooming legs apart!!!

Which all I thought then was YES! As I think if she wouldn't have done it, well if I was there, I WOULD without a doubt!