The Two Donnas from Mama Mia 2 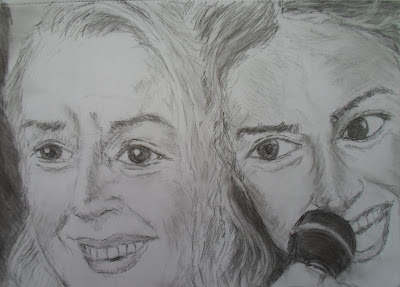 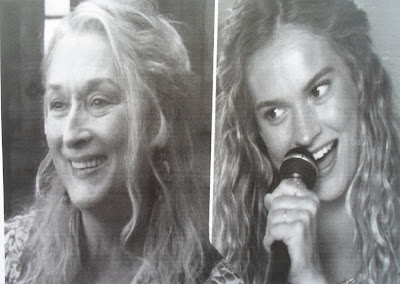 Well, guys, as you properly know, course I know, you're not flaming IDIOTS, this second Film was a follow-up to MAMMA MIA! That was filmed in 2018.

But, what I will tell yeah is...  This Squeal to MAMMA MIA! Is a whole lot better!!!

Course, do you wanna know sumat viewers? The first time that this Film had appeared on our Cinemas...  This girl not only got so emotional by the film, course, of growing up to listening to ABBA  but, she sang along to all the tunes that she had heard!

* But, I've got to confess the only one tune that I've never heard ABBA sang was, ANDANTE ANDANTE!  You must know viewers which one that I was just referring two???  Hey!
* As, it was that tune that "Lily James" that played the young Donna (as you can see above), along with Actress, "Meryl Streep" that played the older Donna!  Had sang to not only everyone that was there, but also, to the young Sam played by Actor, "Jeremy Irvine" in that small Greek restaurant-like!

Only, if I also, tell yeah guys, of this, while NOT only seeing this brilliant Film this Chick fucking Cried her eyes...  Because, as I truly thought it was touching and so moving!  Course, come on viewers, don't you agree with me by saying "that Film even though, it was about Donna's life it was also flaming Romantic???

As, for meeting those three young Harry, Bill and once again, Sam on her journey...  Well, what can I possibly say about each of them!  But, first of all Harry played by "Hugh Skinner" well, to me I found him to boyish-like that I'm afraid to say can't sing a flaming note, while trying to sing to ABBA'S number one hit, "Waterloo" as well as, while standing, looking out to Bill's small Boat as it was going farther and farther out with Donna!

As, for who had played the part as the older Harry!  Well, blooming hell, viewers!  You must recognize him?  Hey!  As, he played our very, very sexy (Mr Darcy), from Jane Austen's Novels "Pride and Prejudice" Actor, "Colin Firth!   Who may I say is quite a looker then!
Though, as for his singing, well, lets just say it was a bit better then, the Actor, "Pierce Bronson" which, I explain later on in this story.

And as for the Actor, that played the older Bill? Well, he was called, "Stellan Skarsgard... And once again, his singing wasn't to bad, then Poor "Pierce Bronson!

As, for the one that played, "Pierce Bronson" Character of "Sam" who was played by "Jeremy Irving?  Well, I really wasn't to sure what think of his singing to "KNOWING ME KNOWING YOU!  It maybe a bit better to "Pierce Bronson's" singing...  But, I heard that, the Actor, "Pierce Bronson" before, he went for the part as, Sam in this Film, didn't know that he was to sing along to the tunes of ABBA.

Course, I'm afraid to say, that he definitely hasn't got the voice for singing...  But, saying that guys, fair play to him, that he had least tried!