A sense from The Burbs -Tom Hanks looking straight up screaming 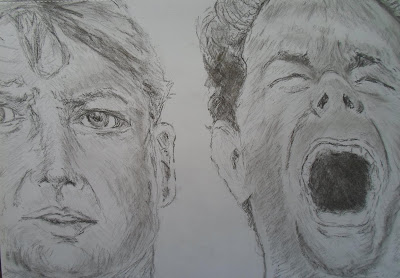 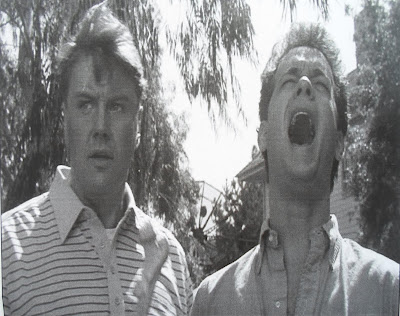 "RICK DUCOMMUN" AND "TOM HANKS" - FROM THE BURBS!
Hi guys, out there!  As you know this idiot as returned!  Ha! Ha! Ha! Ha!
But, getting back to this, old, but it was actually, a well-known film from the 80's, which I would understand coming from maybe most of yeah, can't remember or had never heard of, this film called, THE BULBS!
Which, as you should know from one of the above Actors, was "TOM HANKS!  As, for the other Actor, that's besides him...  Well, his name was, has he's sadly past away, was called, "RICK DUCOMMUN".  He was born on July 3rd 1952 at Prince Albert, in Canada has, "Richard Ducommun" and died on the 12th June 2015 in Vancouver!  Now, "Richard Ducommun was a stand-up Comedian, Actor, Writer and Producer.
As. for "Tom Hanks" we'll he was born on 9th July 1956 (age 64 years), Concord California, United States.  But, as you guys know as a well-known Actor, as he is, he's also an American Actor, for not just being a Film-maker...  But, for both his comedian and dramatic roles.  Course, as you know, he's just one in many a popular Actors!  Who is one in many, once again recognizable in film stars worldwide and whom is regard as an American cultural icon!
Posted by dazzlepops68@gmail.com at 08:15