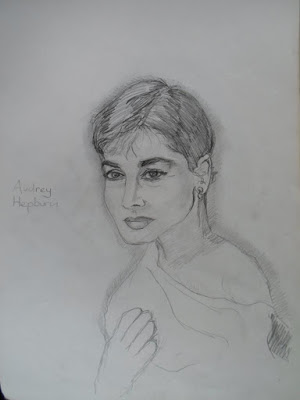 
Doing this portriat of the lovely Audrey Hepburn as she was, from one of my books was no mistake to do, as you guys, if you've ever heard of her should know! For my Old time Favourite Film of hers that I use to watch was called, "Breakfast at Tiffany's! "Which, always got to me, because, of how you eventually see George Peppard Character go up to her in the pouring rain with a ginger cat inbeween them both, Kissins for the first time since they met.
AUDREY HEPBURN
Audrey Hepburn - Was a British Actress and as one would describe humitarian.  Recognised as both a film and fashion icon...   She was ranked by American film institute as a third greatest female Screen Legend from the Gold Age of Hollywood, and was inculcated into the international Best Dressed List Hall in Fame.
Posted by jsm at 07:03