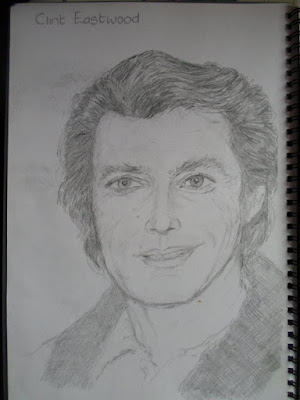 
What can I say about "Clint Eastwood" well, not a lot, because even though, he wasn't one of my favourites Actor's and he wasn't, he was alright in these two films with Clive that rangatang, "Any Which Way You Can" as well, as "Any Which Way But Loose! So, really I don't know why, I had drawn him then, but I did!

May be the real reason to why actual drawn him is that I only found that part in one of those Films where first of all he tells Clive his Ranatang to "RIGHT TURN CLIVE! So he could give ONE hell of A thump of knocking down the baddies that acted like hells-angels with the leader of going down first followed by the rest of them!!! Like you were playing DOMINOES standing near to one another until, we finish piling them all up so close, near so that we could try to knock the FIRST ONE down so the other dominoes would follow!!!

Do you guys carry my drift now!

As well as when those Baddies had chased Clint Eastwood Character along with Sondra Locke Character which to be frank can't exactly REMEMBER for the moment of her characters name in the film and not forgetting Clive to end up going through a "ROAD TAR" which whenever it's been put onto either pavements or roads SMELL blooming awful!

Which anyway, after those baddies had gone through the Tar-mack and Clint Eastwood pays someone to toll them away, well the man who tells Clint's character after he asks him would it be PAINFUL? Well let's just say it will take ALL their HAIR off their bodies! And I certainly do mean it would take each and everyone of their HAIRS off their entire BODY and you can certainly IMAGINE YOU KNOW WHERE! Which if you look at it, it was FUNNY to hear!

But serve them right in just riding their Motorbikes straight through where that hot TAR was pouring out from that truck that was stopped right there!
Posted by jsm at 07:59