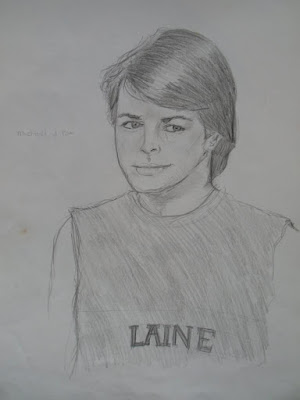 * Now, the reason of why I've drawn "Micheal J Fox" was first, I had thouught he was only nice. And secondly, I did like watching the series he first started in, which was called "The Family Ties" before he starred in the Movie, "Teen Wolf" which, I've got to say, was so funny when I went to the Cinema and first saw it! I mean, seeing him turning into this Teen Wolf that every now and again, at one time he wore a white suit in this film like how "John Travolta" wore in the film "The Saturday Night Fever! Which, after, he then appeared in that well known film, as you guys should know more, "Back to the Future" 1 2 and 3.
Posted by jsm at 06:52