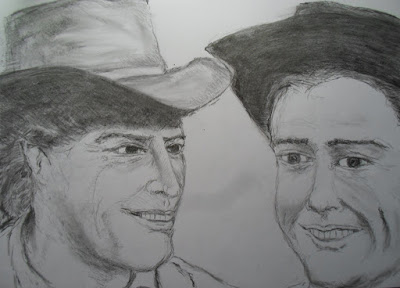 Now. I can sure understand if a lot of you out there have never heard, let alone seen this old TV series called "Alias Smith and Jones" starring Ben Murphy and Pete Duel! But what I can tell you is from remembering watching this series as youngster is that it was a really good series... Honestly guys, it sure was a really good series!

But as you can see from that picture I've drawn it of from is that the series was a American Western series that originally aired on ABC from January 1971 till January 1975. But really the series was all about those two characters that, "Pete Duel" who played Hannibal Hayes and "Ben Murphy" who had played his cousin Jedediah "Kid" Curry was trying to reform...

And even though, the first ever episode of this series had went out on January 5th 1971, till January 13th 1973, sadly the Actor that had played "Hannibal Hayes" - "Pete Duel" had suddenly died half way in the series, which I've got to say, wasn't the same at all without him...

So, what they did after by bring yet another Actor n his place was WRONG! Course, of how I look at it, if anyone starts in a brand new TV series, but something like this happens well no one should ever take their place or role as maybe playing another part in that series! NO ONE!!!

So, once again, guys, what they did of bring someone else, on after the Actor, "Pete Duel" who as a young child thought he's nice, suddenly died... What I again, say is that they really shouldn't have brought another in Peter's place! Course, Roger Davis that took his role can NEVER be our "Hannibal HAYES" just no fucking way! As that was a very big MISTAKE!

Course, whoever thought of bring him or any Actor that is to carry on Pete's role should have just ended it then and there... Not thinking we'll carry on, allowing someone else, to take the role of what I always thought was a blooming good Actor that will never be FORGOTTEN in my BOOK!!!

As in the past I can tell you now, if knowing the series of "Alias Smith and Jones" would come on my screen, but with "Pete Duel" in as our "Hannibal Hayes" then the other one that came later, well I would always watch him along with "Ben Murphy!

Course, in my BOOK even though I was a very young girl then, that TV American Western series starred both "Pete Duel" and "Ben Murphy" was a blooming good series... It's just it was a shame that they had reined it by putting that other into it shortly after our beloved Pete Duel had sadly died!