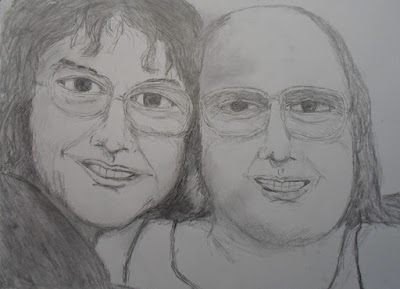 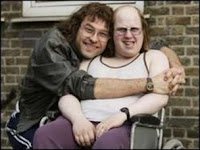 Before, saying anything really, I think I would really like to dedicate this picture that I've drawn to both "David Walliam" and "Matt Lucas!

Hi guys! Well what do you think of how I've drawn these two well-known crazy characters Lou and Andy from that popular TV sitcom "Little Britain??? "Like! Well I sure hope you all do!

Especially, that is, if the guys, themselves, "David Walliam" and "Matt Lucas" that played them had suddenly now stumble upon on this Web-site of mine and saw this picture that I've drawn of them! Well can you imagine their look if those two very well-known duo had saw this? Only, god knows!

Anyway, if you guys are slightly intrigued of maybe wanting to know if you don't know already that is, when this sketch show as it is had first went out, well their first episode had came out on February 9th 2003... But first it was broadcast on the BBC radio before, it had turned into a television show.

And as you viewers out there should know, if that is you are a big fan of the show, the show of "Little Britain" was written and preformed by "David Walliam" and "Matt Lucas" themselves because the final episode of this sketch-show was shown on December 24th 2006
Posted by jsm at 11:29