Star Trek "BEAM ME UP SCOTTY! 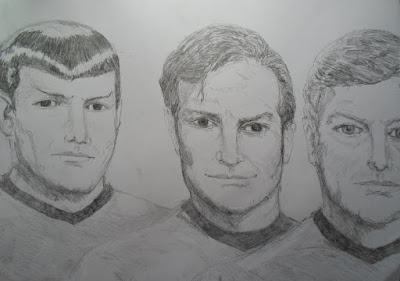 STAR TREK - BEAM ME UP SCOTTY!


Now, to all you guys, that really love or should that be is completely Mad on this most loved science fiction series that came out in September 8th 1966, but which I first saw in the mid 70's being a young girl that I was, that had always sat and watched it in front of my Auntie's living-room television every blooming Wednesday evening at around 6 pm precisely, as I have a good memory in that respect... Remembering certain things and when!

And if it really wasn't for that original TV Series that had went out way back then, but again only saw in the mid to late 70's shall I say, well all those up-dated version of the series, like "The Next Generation" - of Star Trek, "The Voyager" and all those other science fiction series that came out like Babylon 5 & 7 and 10! But please don't quote me on saying that there was actually any series of Babylon 7 or 10! Okay guys! Course, frankly I'm not truly sure that they had done those... And finally not forgetting, of course, "Deep Space 9!

Which, getting back to what I'm trying to tell you all, course, what I believe is no matter how all you guys out there really love those other versions of the original - "Star Trek" like I've just mentioned, well let's just say if it won't for those Actors, "William Shatner" as Capt James T Kirk "Leonard Nimoy" as Spook, Doctor Leonard McCoy who as you guys should know was played by "Deforest Kelly," and "James Doohan" as Scotty not forgetting the Actress that played our Uhura are sorry to say in my BOOK don't think any of those new up-dated si-fi series can ever REPLACE that ORIGINAL Star Trek!

Course, they were the only "STAR TREK" to me and I truly mean they were the ONLY ONE... The others just can't ever beat it even though you may otherwise! Sorry!

Course, the original "STAR TREK" will always be the ORIGINAL to me once again!!!

But what I would like to add is if and only if, those original Actors that starred in that well-known loved series back then, of "Star Trek" but who is left from it of course!

So, really I sure hope they all like this drawing of the three main characters that I've done including all the others that starred in it!
Posted by dazzlepops68@gmail.com at 06:57