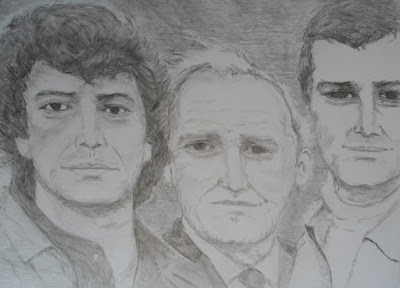 Hi guys! Now, this picture I've drawn was one in many that I use to love watching has a young teenager. And don't worry, I can understand if there is a few of you out there that can't really remember these three that starred in this brish crime-action television drama series that was produced by Avengers MK 1 Production for the London Weekend Television that aired on the ITV network from 1977,

For me thugh! Well back then, when it was on every single night on a Friday, around 8 o'clock you could always vouch that I would a;ways sit down and watch them. But guys, do you want to know something else? Well around then, all my friends from School had a big thing for the Actor that played Bodie!

Now, don't get me wrong, even though, Bodie that was played oh-so, brilliantly by the late great Actor, "Lewis Collins" who I'm sure will always be loved as well as not have been forgotten by us that really growing up watching, "The Professionals" I was the only one that liked his partner, Doyle that was played by "Martin Shaw! As well as I did like that Actor who had played Bodie but in yet another series...

Only, this series was't like any other drama series, as in such, for it was a sitcom called "The Cuckoo Waltz! Which, if any of you out there has never heard of this sitcom, well first of all, it was a British television sitcom that was made by Granade television for the ITV network between 1975 to 1977.

And secondly, this comedy was based on a married couple called Chris and Fliss that had a simple life with a few possession and twin babies until, their life changes when once again, the Actor "Lewis Collins" come in as their lodger, Gavin!

By the way, if and I do mean a very big IF-like that the Actor, "Martin Shaw" that had played Doyle in that hit TV series of The Professionals has stumbled on this Web-site... Well I not only hope he likes this picture of all three? But if he does, well I sure hope I've done justice in how I've drawn YOU guys!!!
Posted by dazzlepops68@gmail.com at 10:22