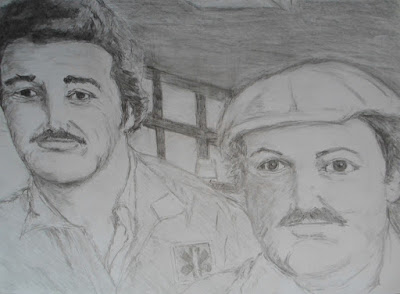 Well viewers! What do you think of this picture that I've drawn from that well-known film called "The Cannonball Run? Which, first of all was a film about a daredevil J J McClure and other characters (Roger Moore) get in the fast cars and take off on a cross country race! Hey! Like it!

Course, the reason of why I thought I wanted to draw these two well-known Actors, was that way back then, when first of all that this film was more then less shown on our screens was that when I saw the film had thought it was so FUNNY!

Especially, when I saw near to the end "Dom De Luise" character, Captain Chaos had tried to run to the finish line while all the others had problems... Because, if you guys out there had saw it yourselves then you would know what I mean, course, what happened was - instead of running has fast has he could, for J.J who Burt Reynolds had played he simply decided to stop because of hearing a lady crying out!

Well, that's what Captain Chaos had thought at the time, then listening to all that was really telling him to go and RUN!!! Course, after leaping what looked-like a hedge Captain Chaos had came out all dripping wet with a small dog, then once again, thinking to himself that he was going to save the lady!

But after seeing J J and the others telling him you idiot you, for you could have won the race you know that "Dom De Luise" character decides to change his costume for "CAPTAIN USA" then Captain Chaos!!! While, not just allowing one of the other racing drivers to win the race as they did... But it was shortly after "Burt Reynolds" character, J J and the rest telling him off that Dom De Luise character Captain Chaos had said to all of them, "I don't care course, I always wanted to be - CAPTAIN USA!

Which, as you guys gathered, was when you see him change suddenly into "Captain USA!!! Course, one minute you see him has Captain Chaos then, the next, after "Dom De Luise" character quickly turn around, with him holding one side of his cape hiding his face-like well it was then we meet our Captain USA!

Which, was when you see all of them burst into laughter!

Only, I've got to say this I only loved when all of a sudden you see J J (Burt Reynolds) character start to blooming laugh, because his laugh is so FUNNY to hear!