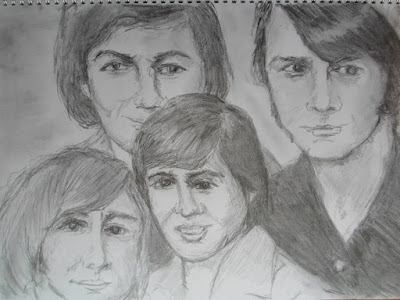 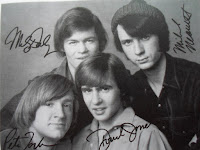 Well what can I say on this picture first of an old group from the 70's as well as it was also yet another favourite group of mine like "Showaddywaddy" called "The Monkees" For every time I heard "The Monkees" come on, well this girl had always go a little CRAZY... Because it always seems to starts with "HERE WE COME WALKING DOWN THE STREET WE GET FUNNIEST LOVE SONGS EVERYONE WE MEET... Then, ending up singing as you should know Hey! Hey! With the Monkees!!! Course way back then guys, I would always loved watching their half an hour series on every Saturday Morning, if the series called "The Six Million Man" starring "Lee Majors" as Steve Austin weren't on!

For who as a very young child, had always thought.. And this is NO joke either guys had Loved course, I always use to say to myself "I love you my Steve Austin! But may be it was partly because when that dam series had always started on every Saturday Morning around 9am-like, well it was every blooming time I had heard the theme tune as well as hearing "Oscar Goldman" who was Steve Austin's boss in these series say, "STEVE AUSTIN, ASTRONAUT, A MAN BARELY ALIVE, WE CAN REBUILD HIM, WE HAVE THE TECHNOLOGY... Then ending up saying "BETTER THEN HE WAS! "BETTER, STRONGER, FASTER!!!

Which, if anyone out there that can remember that TV series had started

Anyway, getting back to my second most favourite Groups "THE MONKEES" Which I would like to dedicate this picture that I've done for "Davy Jones" who was the lead Singer to that group to his family... But more so to YOU "Micky Dolenz" who was the drummer and singer! Course, practically because how you felt of losing a very close friend that was also more like a family of yours to... Okay you Smiler! Who you Micky had made this young girl smile so when she saw you clowning around in that series! Which I've got to say was a "Class A" by the way!

So, Micky Dolenz! If you do happen to see my Web-site well this picture is for probably more YOU because of how you really had felt after now Davy can't ever be around... But he will always though, be LOVED, MISSED as well as REMEMBERED by all Micky! And that's a fact!!!

But can I just say I loved YOU more while watching all YOU guys, course a lot of us then had probably preferred Davy... but ME well I couldn't help MYSELF I really loved YOU! Maybe it was due to the fact, you had always acted so blooming WACKY which I like to say, I now acts like how you had back then! So, thank you my sweet Micky Dolenz for tha!

love you guys always!
Posted by dazzlepops68@gmail.com at 09:06