Kevin Costner in Robin Hood The Prince Of Thieves 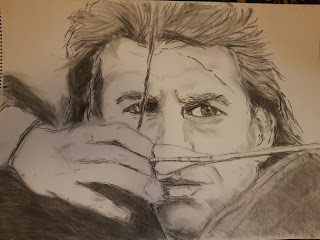 KEVIN COSTNER
ROBIN HOOD IN THE PRINCE OF THIEVES
Hi viewer's out there!  As you can see from this picture, I've drawn a picture of the Actor, "Kevin Costner" from when he starred in that well-known Film "Robin Hood in The Prince of Thieves!
And as you guys, know it was really said to be based on a American romantic action adventure...
Of a Nobleman crusader called Robin Hood of Locksley which our (Kevin Costner), played the part has and that in the film he first breaks out of a Jerusalem prison with the help of Moorish fellow prisoner called Azeer!
Which, was played by another well-known Actor (Morgan Freeman) who after travelling far and wide back to England, where both had discovered on their arrival Robin Hoods dead father in the ruin of his family estate, killed by the vicious Sheriff of Nottingham.
Now, if you guys have seen this film, well surely you guys should know that the very Evil Sheriff of Nottingham was played by the very well-known Actor, but who also sadly died, "Alan Rickman!
And yes viewers!  Like in all Rood Hood Movies there was a Maid Marian...  As she was played by the very talented and beautiful Actress, as most guys would probably find her "Mary Elizabeth Mash!
And if any of you don't already know, this film was released on the 14th June 1991 (USA).  Directed by Kevin Reynolds and featured the song (Everything I Do I Do It For You)  Which, Bryan Adams sang so well!
﻿
Posted by dazzlepops68@gmail.com at 11:02