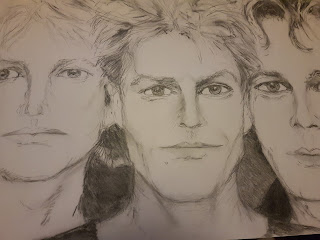 POLICE - STING, ANDY SUMMERS & STEWART COPLAND
* Before, I start to really talk about this picture that I've drawn of one of my many
favourite groups that as a younger age, had liked to listen too, may I just start with
if anyone that is interested in seeing the picture that I've drawn of "Julie Walters"
as being the silly Mrs Overall in "Acorn antiques...
* As, I've drawn a picture of her below this one of the group POLICE...
So, all you guys, just have to do, if you want to see this picture of her is CLICK
onto Old post because that extra one is there for all you viewers to see!  Okay!
Right let's get back to this Group POLICE...
* Course, if you guys out there don't know the Police were an English new wave
band formed in London in the year 1977.
For the most of their history the band consisted of String, Andy Summers and
Stewart Copeland.  Their most famous songs as we can remember were...
"Message in the Bottle," "Roxanne" and finally "Every Breath You Take"
which as you guys know, even though they had done many more in their years
ahead.
* But to me though viewers, those three songs were the most popular ones that I
can really remember them singing!
"Message in the Bottle" went out in the year, 1979.  As for the other two, well
first of all "Roxanne" had went out in 1978.  And as for "Every Breath You
Take"  well that went out on the year 1983.
﻿
Posted by dazzlepops68@gmail.com at 10:57