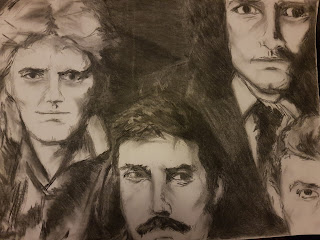 QUUEEN
ROGER TAYLOR, BRIAN MAY, FREDDY MERCURY and JOHN DEACON
Now, Queen if anyone of you out there don't know already is a British rock band, they formed in London in the year 1970.
And, even though they had so many songs that we all love, course if I'm not mistaken to say, there's
a lot of people that love QUEEN'S music!  Hey guys?  Me included!
Well, let's just say, "they were one of my so-call favourite songs, of growing-up that I always liked
to listen to...  And the songs I most liked of theirs was really "Bohemian Rhapsody," "We won't Rock" and "Don't Stop Me Now!
Although, saying that guys, I did love to listen to "I Want To Break Free" and "FLASH!  Which, they sang as you guys should know to the theme tune of "Flash﻿ Gordon!  Starring, "Sam J Jones" as Flash of course and "Max von Sydow" as the Evil Ming!  Now, do you guys remember that film???
Anyway, let's say I loved that tune!  After the Lead Singer, "Freddie Mercury" died, you could I thought the group QUEEN was not the same, even though, many had sang in his place!  I always believed, which I don't know about you that no one could replace or take over the late great "Freddie Mercury!  Because, for one thing our Freddie, had the most powerful voice that no one else, had, if you know what I mean!  Course, boy!  Every time he sang any song, that is I always thought  again,
'Wow!  'What a voice!
Posted by dazzlepops68@gmail.com at 10:59