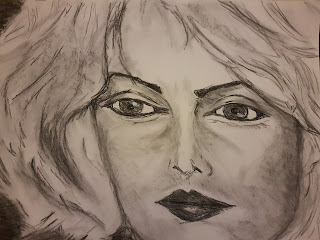 BLONDIE - DEBBIE HARRY
Before I start, I would like to really dedicate this so-call picture that I've drawn of our Blondie to a dear old friend, that's if she's watching, "Roz!  Because, she really liked her so much as I do, but how every fucking time I went into her work that used to be opposite to mine, those many years ago, well, let's just say she always had me in stitches!  That's Laugh so much viewers!
Especially, this one bloody time just before I was due to start work one day and went straight into her work to say hi to everyone, including herself...
Only, when I tried to say hi to Roz, Roz asked me first, "Hey Sandy! "Have you seen our new item?"  Which of course, how could I since I only came in!
Anyway, let's put it this way when she pulled me towards the back of their store, this girl got herself embarrassed because it was what she had wanted to show me!
But do you all think I'm fucking STUPID to really tell you guys, what my friend Roz had wanted to show ME!!!
As, that is really between her and me if some day she NOT only comes across this Website of mine and see what I've draw for her...  but also, try to REMEMBER that time for WHAT IT WAS that she NOT only wanted to show me, but that CRAZY Roz had also put that new item ON!
Which, as I said before, had me in fucking stitches!!!  Cos, of what this item did, in front of me, then, when her Manageress, saw me with Roz, laughing so, she to would have to join in by putting that new item on!  Which, I'm still NOT saying nout of what this very NEW ITEM of theirs was!!!
But it SWINGS sideways!
And Roz, if you girl is seeing this, it was bouncing up and fucking down as well as, it did blooming SWING sideways!
Ha! De! Ha! Ha guys though!  As, you should know by that, that I've given all you a biggest CLUE to what the item may be! Just maybe that is!
Only, I'm NOT going to say what sort of shop she flaming worked at! NOPP!!!
But, seriously Roz Babe!  I just wanna say I've got you girl, for all those flaming times I just could NOT stop laughing!!!
So, anyway, getting back to "BLONDIE" who as a very girl teenager, loved listening to her songs...  The Lead Singer to Blondie (Debbie Harry) was born on the 1st of July 1945 in Miami Florida United States... Which of course, would now make her 72 years of age!
And if you wanna know her full name well, she was born as Deborah Ann Harry.
Only, I hate to say this, but even though she was quite something between the 1970's like, well, she as really let herself go!  Just like so many out there, that you could say looks awful! No offence!
But come on guys, even though she maybe in her 70's now, some in her age wouldn't look a right state!  As I thought I was fucking scaring all the guys away with my looks...  But if you guys, saw what she looks-like now well, then you would probably under-stand!!!  So, sorry, Roz!  Blondie as certainly looks-like she's gone DOWN-HILL! Meaning, that she really looks like she had Plastic surgery, but very BADLY with make-up!
﻿
Posted by dazzlepops68@gmail.com at 11:07