Tommy Steele from the Musical Movie HALF A SIXPENCE 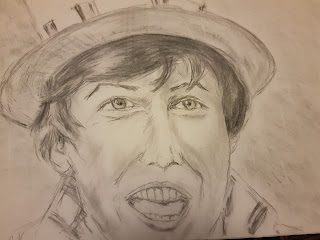 TOMMY STEELE  in "HALF A SIXPENCE!
"IT'S TO FAR ABOVE ME NOT HALF SHE IS...
Now, many of you out there won't probably have heard of this well-loved Actor, who as a child, adored him so much in this Musical Film that was called "Half A Sixpence!  Which, don't worry as I understand guys, as he's a very old Actor...  It's just as a young girl you could say "when I heard that film was going to come on around certain Christmas time," by my beloved Dad well, you just IMAGINE guys, a little girls face, light up with a huge smile!  And guys, that's NO joke!  I was always crying out for joy to hear that "Half A Sixpence" was coming on by my dad!  Yeah!!!
Half of the reason though, that I was so glad to hear that this film was coming﻿ on, was at a young age, this girl NOT only like "Tommy Steele" so much, but guys, this very little girl back then only liked blonde hair and may be blue eyes!  But only through watching, either TV series or Films!
Anyway, if viewers don't know, this film "Half A Sixpence" was a musical comedy based on the novel Kipps by the author H G Wells.  The film went out or should I say was released on the 21st December 1967 and of course, it was a British musical filmed and directed by George Sidney and the choreograph was Roger Ebert!
And both had really felt the Actor "Tommy Steele" was the right performer for that sort of schmaltz...  and wallop but very little warmth or soul, the helpless star would attempt to carry the film by grinning throughout!  And along with the star, played the Actress "Julia Foster" who if anyone doesn't know already, is the mother to the presenter "Ben Foyle" well, that's what I've heard once.
But getting back to this film because as a young child I also loved films that either ended happy or romantic-like...   course I to felt deep in me would imagine ending up with a really decent guy, that's shy when I would become older that is!!!  But all that now guys as changed, as I don't feel like I want to imagine, what would it be like if I meet someone???
Because, if the truth must be told, being older now, I find a lot of guys, around Redditch these day muck of how I used to dream or believe in my early years!
But anyway, getting back to this Actor "Tommy Steele" who as a very young child had so truly adored him in this well-know musical Film of "HALF A SIXPENCE!!!  Maybe, it's because the ending was so nice and romantic, especially when I kept watch Tommy's character in the film of
trying to get Ann (Julia Foster) back by going to where she worked has one of the Maids in some Mansion!  Aww!
Course, I tell you guys, that part had always used to get to me...   Maybe, it was that he told Ann how it's her he really loved and NOT who he was going to be MARRIED to!
Posted by dazzlepops68@gmail.com at 11:00