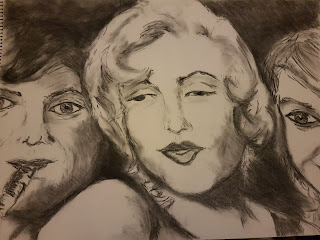 * Now, guys if any of you haven't really heard of this well-known, but Old film, of "SOME LIKE IT HOT" well, it me just tell you all what's it really about...
Okay!  As, first of all this film is a 1959, American romantic comedy set in the year of 1929!  Which, you would have thought guys, by now of course, that I would probably love this so-call film due to it being Romantic should I say..

*  But, if you really must know guys, that film wasn't my cup-of-tea!!!  Meaning of course guys, however I like to think I'm a really romantic person, which I am!  I couldn't see that as a truly romantic film like others that I use to watch!  Which I had in the past!
* Because, this film didn't really appeal to me, for one and maybe it was that I didn't like those very old Black and white Movies when I was younger, which this was!  Still don't!  As well as, I wasn't keen on that Actor "Tony Curtis" even though, I know that there are a lot of you out there, mainly women, of course that loved him!!!

* But, seriously guys!  If none of yeah hasn't really seen this film well, let me just tell you all about what this so-call crazy film was about!  Alright guys!  As it was really about to musicians called Joe and Jerry.  Joe was more like a ladies man while I would say Jerry was more stupid as in funny ha! ha!  If you can get my drift!
* Anyway, after witness a Mafia murder, slick saxophone Joe that was played by "Tony Curtis" and his long lost suffering buddy Jerry, played by Actor, "Jack Lemmon" improves a quick escape from Chicago with their lives.  They ended up disguising themselves as women!  Yes! I did say "WOMEN!
Because, first of all, to escape to sunny Florida, they both saw that the train was full of woman that was in a jazz band...  Which, if you saw this film, was lead by their lead singer, SUGAR that
was played by the sexy (Marilyn  Monroe).
And if I didn't mention this already, well guys, while you see Joe, "Tony Curtis" character pretend to be a millionaire so he could win the heart of the sexy SUGAR...
Well, you see poor Jerry that's "Jack Lemmon" character being blooming chased by let's say a daffy but who's a real fucking Millionaire.  Who was played by "Joe E Brown!  And yet the crazy thing was, if I can remember, Jerry even though, still dressed as a WOMAN didn't tell him that he was a feckin' MAN!!!  NOT A WOMAN!!!
Though, saying that viewers, I do think he had... because something tells me that "Joe E Brown's" character in the film which of course, was "Osgood Fielding the III" said something like to Jerry who yes guys! Was still dressed as a fucking woman, "Daphne" "Well, nobody's perfect!!!
﻿