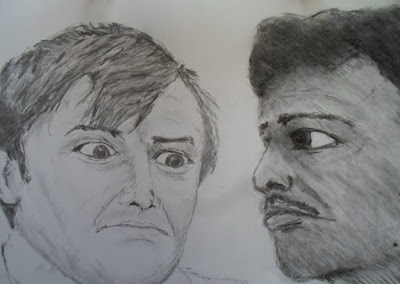 Hi yeah viewers!  As most of you out there have never heard of this sitcom, well let me tell you a little bit about...  Okay!

"Love Thy Neighbour" was a British sitcom, transmitted from 13th April 1972 till the 22nd January 1976, spanning seven series & fifty-four episode.  The  series was produced by Thames Television for ITV network.

It starred Actors, "Jack Smethurst" and "Rudolph Walker" as Eddie Booth and Bill Reynolds, who way back then, even though I was fairly young, thought was so funny!

And I certainly do mean I thought it was absolutely FUNNY!!!

Course, nearly every fucking time you see these two Actors, living as Neighbours, well you can expect one would do something to the other-like - as a PRANK.  Then, no sooner then that one finds out about it, well they bloody try to get their own back on them as well. With language that I can not really say!  Course, it's not like they say something like "you fucking ****!  No! It was a little more, but still it was funny, seeing them both trying to play silly little pranks on each other!!!

But it was their poor wives that had to put up with them.
Posted by jsm at 01:14