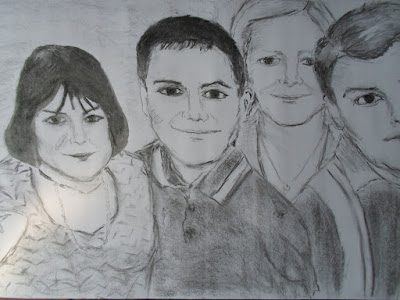 Hello guys out there!  Or should that be viewers!  As you probably can see I tried to draw that Comedy Series "GAVIN & STACEY" which I'm sure there may be a lot of you like.  But, as for me, I just see it as total CRAP! CRAP! CRAP!!!  And that's NO fucking MISTAKE either guys! They are!

Because, from all those comedy series I've probably watched in my past, not to mention the old TV series well, first of all, I know things as to change, but really these days now, instead of CARRY IN ON from producing more good TV series and Comedy Series like from the past...  Well, whoever thought of this comedy and the "Royal Family" well, have they got a PEA in their fucking Brain!  Hey! Because it's nothing like how those good comedies' were...  But may I also, include the American comedy "The Big Bang Theory" because that's RUBBISH also!

And I'm not sorry either for saying this!  So there guys!
Posted by jsm at 04:34